Yesterday Brendan and I went to Greendale to climb Middle Fell (1908ft), Seatallan (2266ft) and Buckbarrow (1410ft). A walk of 6 miles.
The mountain forecast was for cloud but with panoramic views and 0% chance of rain, the weather was due to improve and include sunshine in the afternoon so we didn`t even set off from home until after 9am.

As it was Bank Holiday weekend we had decided to go somewhere quiet. We parked on the grass in the hamlet of Greendale. Looking up at Buckbarrow our final fell of the day. 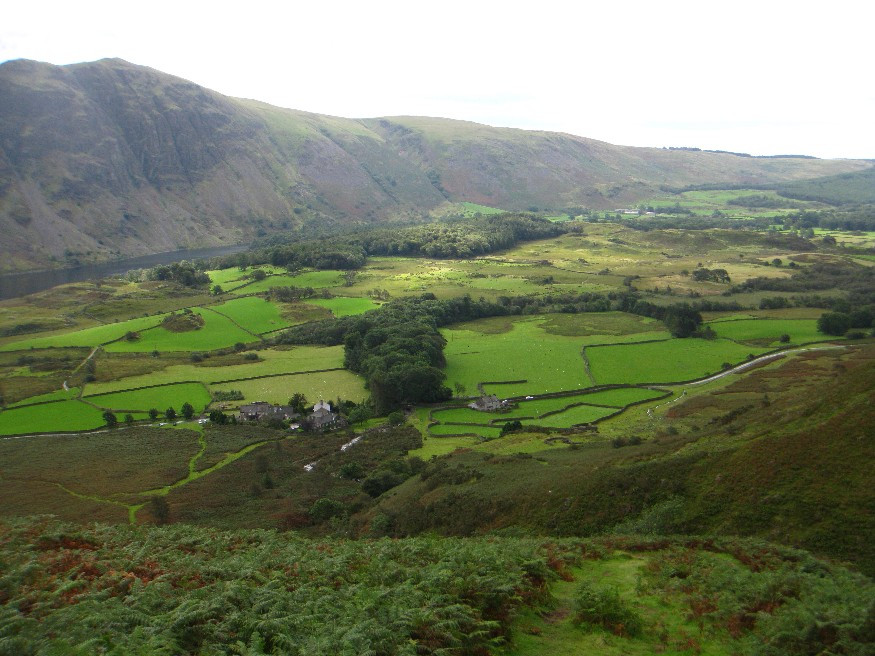 Looking down from the path up Middle Fell. Wast Water on the left. Our car at the start of the path to the left of the houses. We would end the walk coming through the grassy gap between the houses. 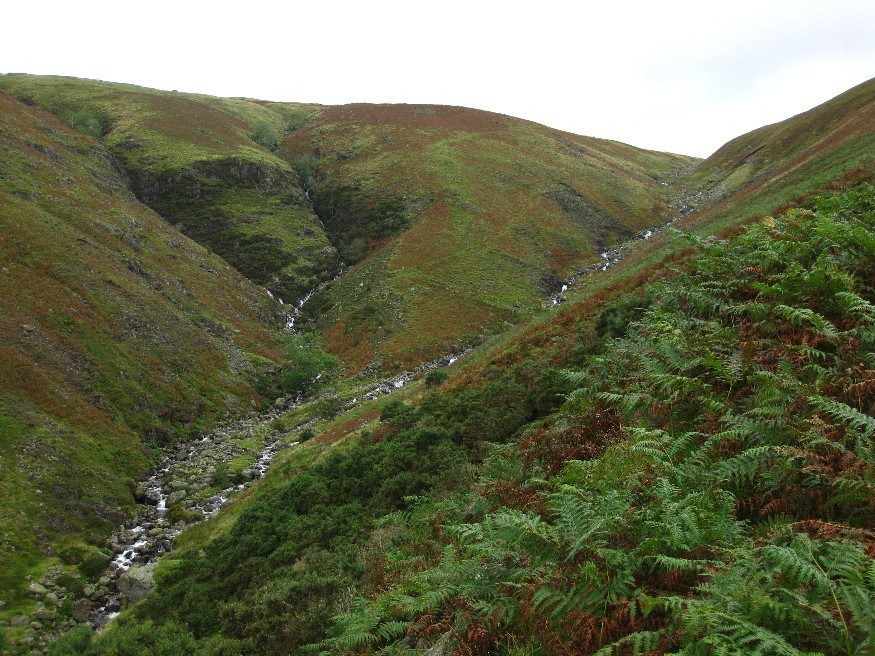 I spotted someone on the other side of the gill, taking the steep path we would use to come back down. I recognised his running gait and his "short shorts", it was the legendary sheep farmer, Joss Naylor MBE, out fell running with his three dogs! Surprisingly he was running with two walking poles, but then he is 76! 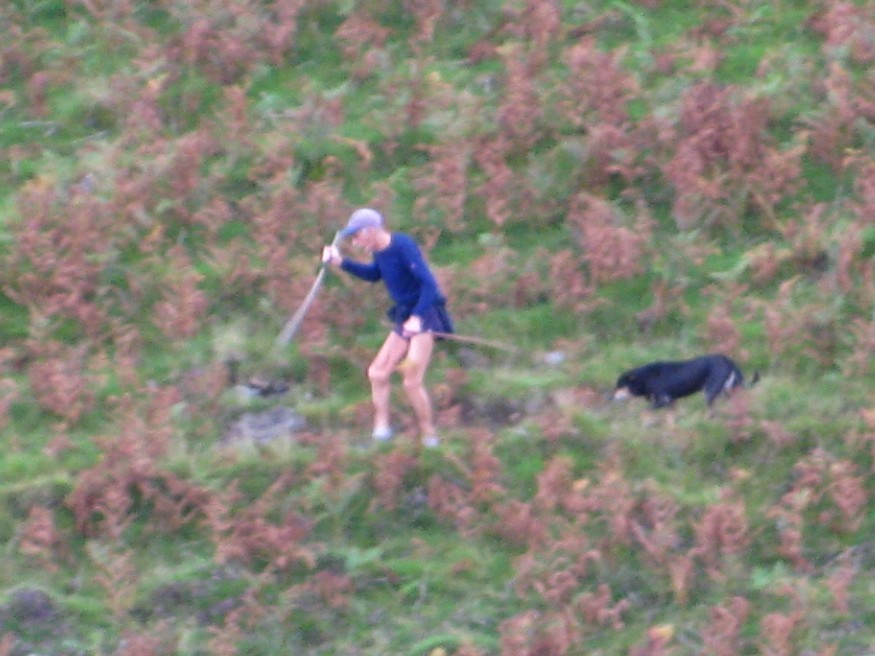 As Joss heads down to his farmhouse below we continue up Middle Fell....at a much slower pace!!!!

Looking down on Greendale Tarn. It has started to rain. So much for a forecast of 0% rain!!!!!! Soon there would be no visibility so we head for shelter.

Summit view. The mist is shrouding the Scafells. On the left is Yewbarrow. 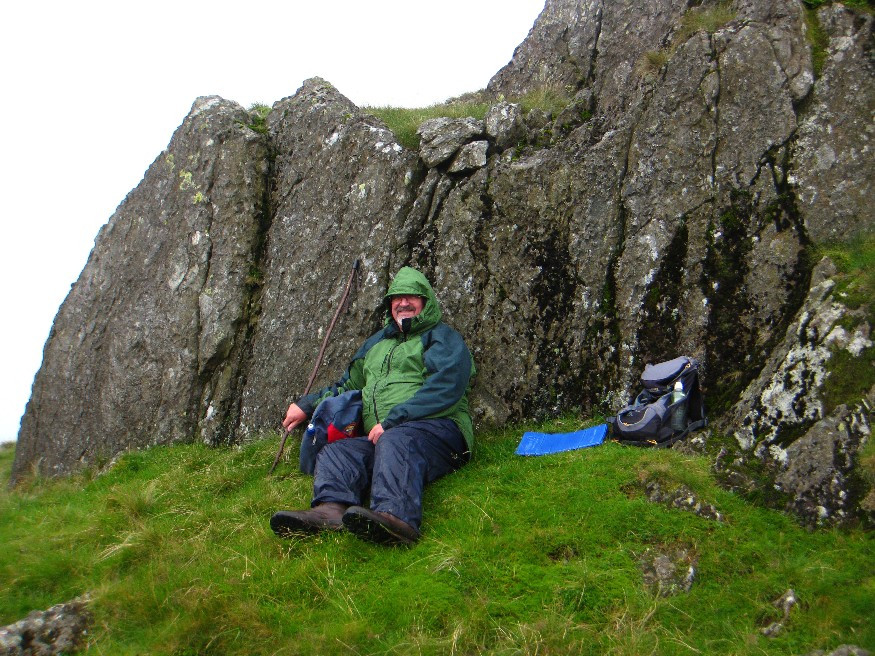 Waterproofs on, as we are enveloped by cloud and rain. We shelter behind a rock outcrop and have lunch while we wait for the worst of the weather to go over us. 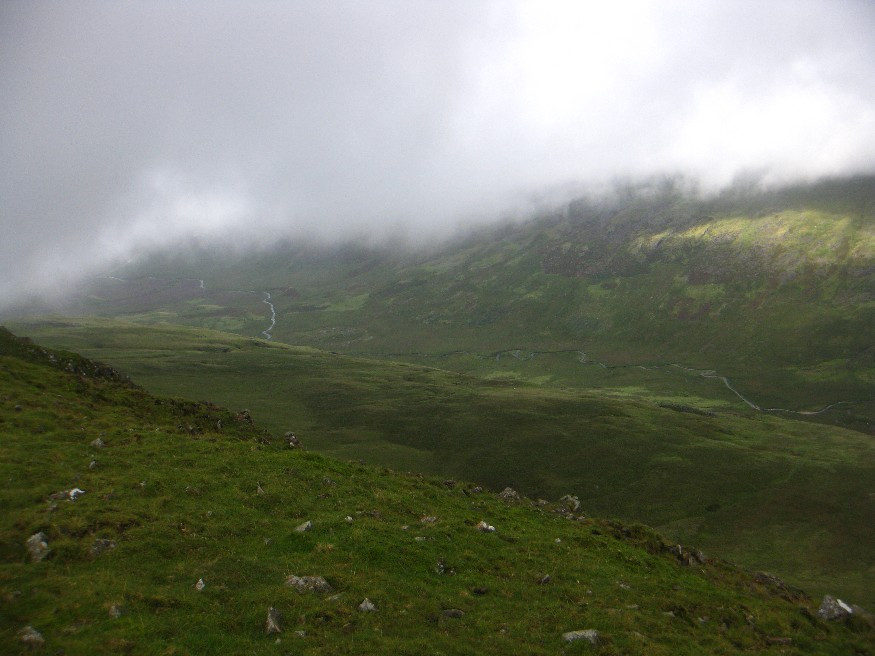 View down the River Bleng from Seatallan summit before it was engulfed in cloud again. Soon there was no visibility. 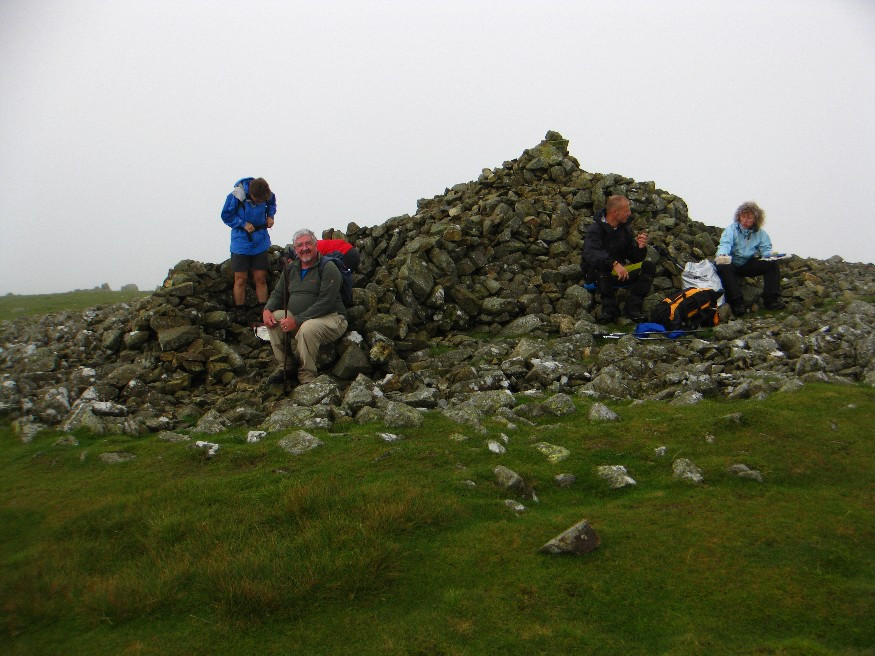 Summit shelter. We waited for ten minutes to see if it would blow over, but it didn`t, so we set off in the direction of Cat Bields. 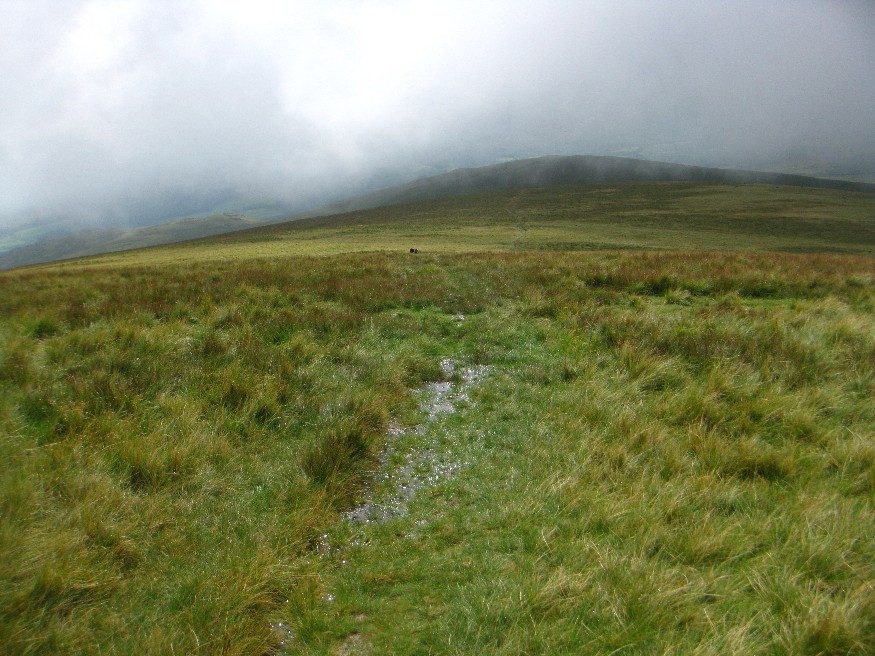 As we lost height Cat Bields came into view ahead. 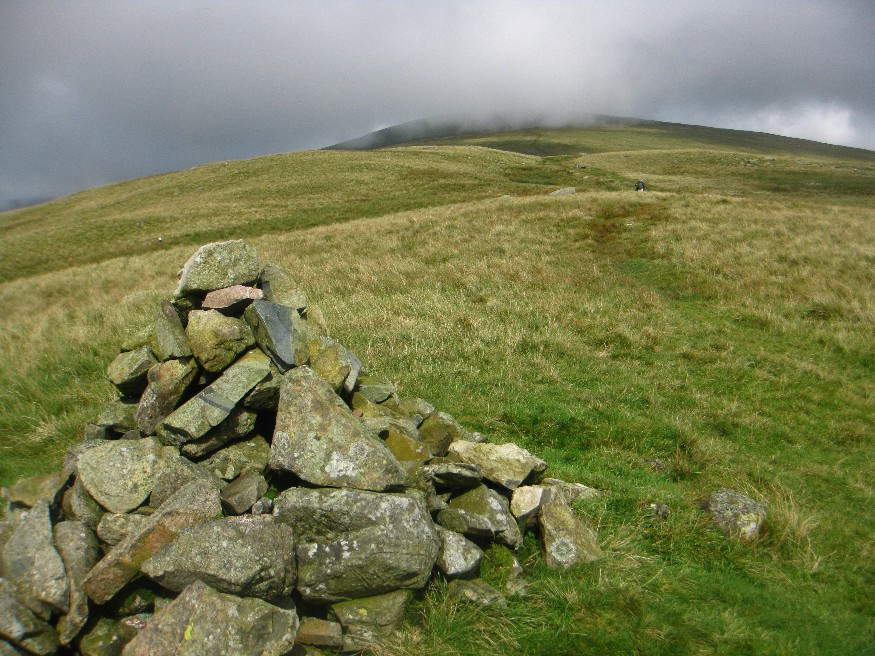 From Cat Bields looking back up to Brendan and Seatallan still shrouded in cloud.

The further down we go the more is visible. Heading for Glade How with Buckbarrow behind. 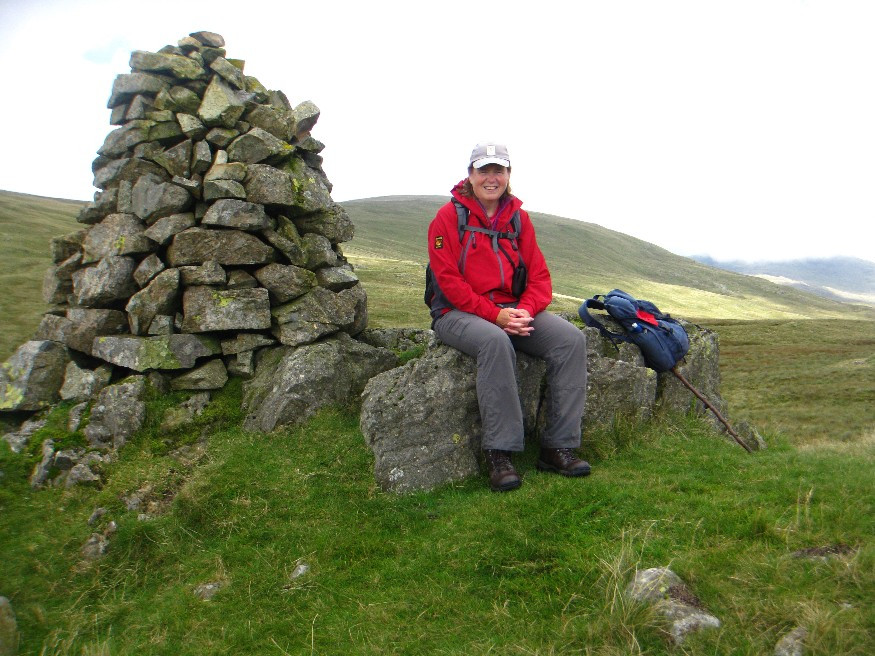 Glade How summit cairn. Bits of cloud still on Seatallan and the hills behind still totally obscurred. 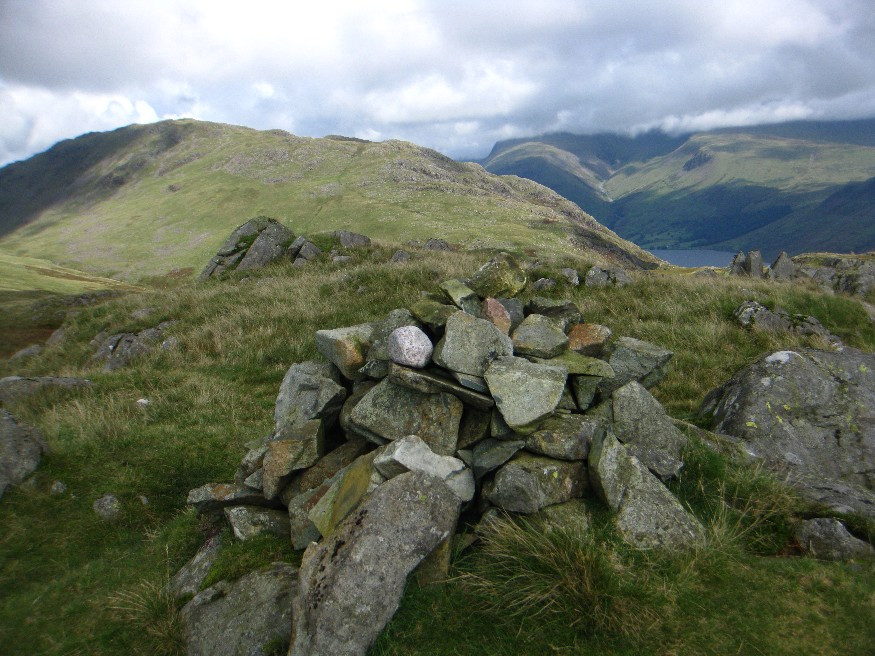 Buckbarrow summit cairn. We head for the rock edges and the views down into Greendale. 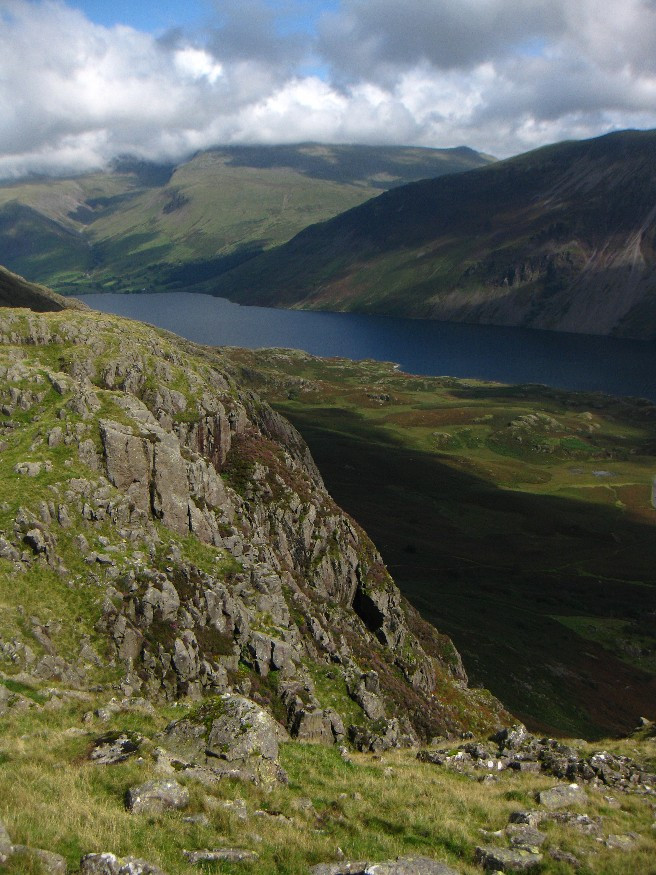 A panoramic view from Buckbarrow. The Scafells and the Wasdale Screes across Wast Water, Greendale below.

Panorama: Looking across at our route up Middle Fell.

Panorama across Greendale Gill to Middle Fell. The Scafells are now out of the mist.

Brendan takes the path down, I detour across to the cairn built by Joss Naylor. 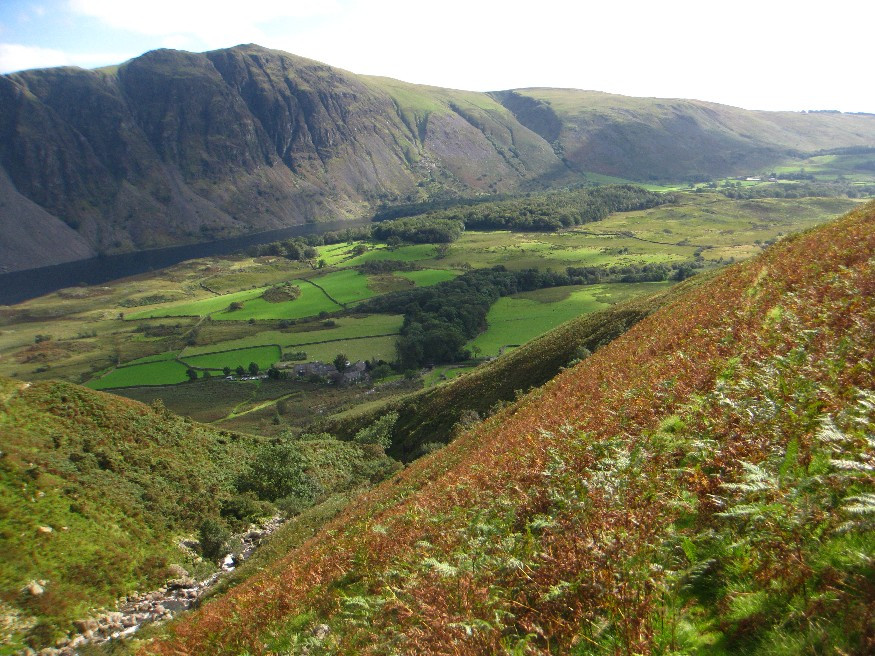 Taking the path through the bracken. Ged and I did this a couple of years ago in early July, and the bracken was 5ft high!

Some excellent waterfalls and pools.

This ancient sheepfold was rebuilt by Joss Naylor, it is just above his farmhouse. 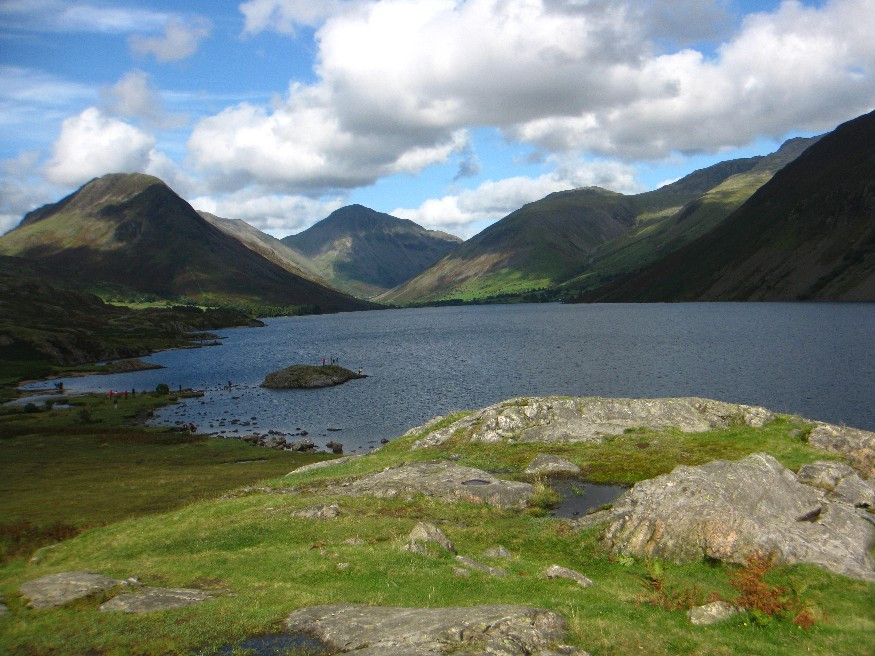 We head down between the farmhouses and back on to the road for the 40m walk back to the car. We stopped in the usual place for the view, which was a lot better than it was this morning! 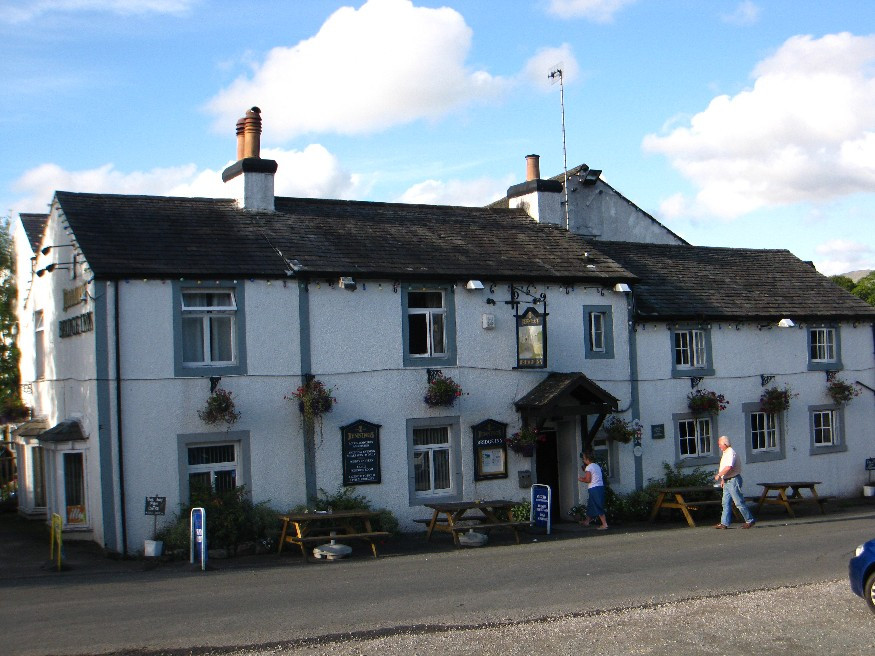 We then headed for the Bridge Inn at Santon Bridge for a coffee and a meal.

A good day despite the inaccurate weather forecast!
Jo.