On Friday Ged, Kas and I drove to Wasdale to climb Lingmell (2649ft), Scafell Pike (3210ft), Scafell (3162ft) and Slight Side (2499ft). A walk of ten miles. Back in January 2009 I decided to have a go at completing all the Wainwright Fells in a year. A combination of work and weather put paid to that. But today I would complete my repeat of the 214 Wainwright`s in under 17 months.

We stopped off on the side of Wast Water to take the usual photo at 9am. Yewbarrow, a glimpse of Kirk Fell, Great Gable straight ahead, Lingmell, Scafell Pike, Scafell, the Wasdale Screes.

We set off from Brackenclose getting the last parking space in the lay-by. The steep slope of Lingmell ahead. The Scafells at the back.

The route up Lingmell is grassy and steep, but preferable to the busy highway up Lingmell Gill leading to Scafell Pike, the route the world and his dog takes. We saw nobody this way! There were cows and calves on the path at the start of this route up Lingmell, and we were charged at twice by cows that were unhappy at Kas being there! Looking down on Wasdale Head and into Mosedale. Pillar ahead Kirk Fell on the right.

Looking down at the steep route up the grass. Today is the hottest day of the year so far. The climb is hot work!

The steep route continues ahead! Lingmell summit is way off, out of shot to the right.

Looking over to Scafell Pike on the left and Scafell on the right. Mickledore inbetween.

The summit cairn with the views. Great Gable behind me

We continue on to the main cairn skirting the edge for the good views down into Piers Gill below.

Ged takes his photo. Sty Head Tarn on the right.

Looking back to Lingmell from the Col. Ged catches me up as we make our way up to Scafell Pike.

Great End, where we were on Tuesday, on the right.

Still a bit hazy. But the first time I have worn T-shirt and shorts on Englands highest mountain! Usually it is coats and woolly hats even in summer!

Mickledore with Broadstand behind. We need to descend down the scree path on the left to reach the gully that leads up to Foxes Tarn. Broadstand is a quicker route, but ropes are required. There have been many fatalities from people attempting Broadstand without ropes. We intend to take the long, safer route up to Scafell.

View to the head of Wast Water from Mickledore.

I watch a climber with ropes!

Heading down the scree towards Eskdale. Still quite a bit to descend. Ged watches two walkers climbing Broadstand without ropes!!

Our way up the gully to Foxes Tarn. Two walkers on their way down. It is a scramble, but easy enough.

Looking back down from about half way. Another walker at the bottom of the gully is about to start up

Looking out to Bowfell and Crinkle Crags.

Near the top looking up to Scafell Pike. How much we had to descend is now pretty obvious!

Ged at Foxes Tarn, our chosen lunch spot. Not much water in the tarn which surrounds the large rock.

Kas gets a cool down in the stream before we need to head up the scree towards Scafell summit.

Looking back down the scree to Foxes Tarn from about half way up.

Approaching the summit, having regained all the height we lost, looking back at Scafell Pike.

Ged chatting with a chap on Scafell summit

Looking at the long, steep scree run we have just climbed up.

Slight Side, my final summit is at the end. Looking at Hard Knott and Harter Fell and out to sea.

The valley leading to Esk Pike with Bowfell behind.

Rescue Helicopter flying over Mickledore between Scafell and Scafell Pike. 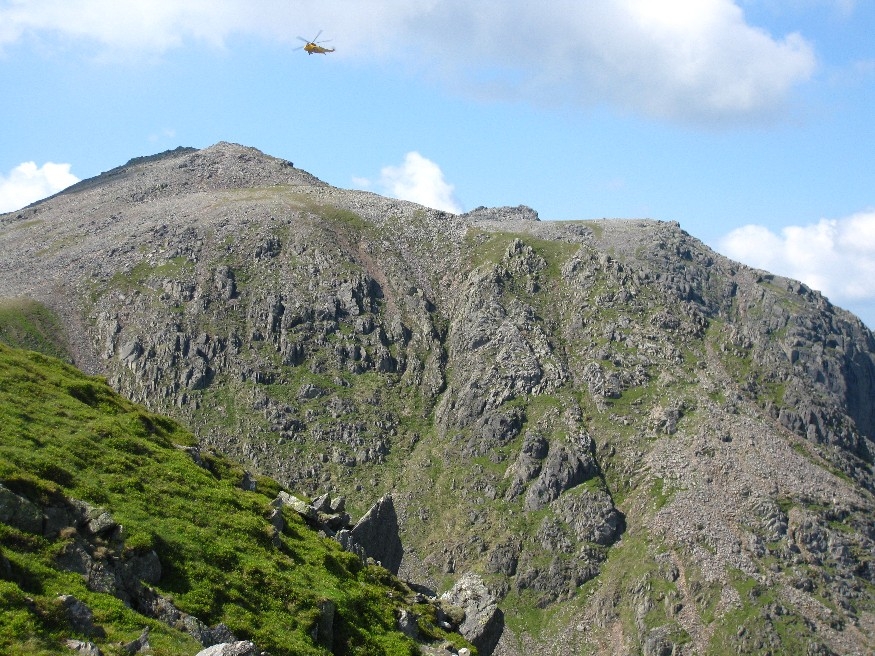 Looking back up to Scafell.

The helicopter then hovers over Scafell Pike summit. Something must have been going on, but I`ve still not heard what it was.

Slight Side summit. There are two rocky peaks so we visit both. Kas waits below.

Me on Slight Side with Scafell on the left and Scafell Pike peeking out on the right.

Our route down to Burnmoor Tarn

The last time I walked up to Slight Side from Burnmoor Tarn I came across this memorial to two Polish Airmen by accident. The mountain side was strewn with bits of machinery which turned out to be the remains of a World War Two Hurricaine Aircraft. So this time I looked for it on the way down.

Ged investigates one of the larger pieces of wreckage.

Heading down beside the gill.

We walk over bog and bracken to reach Burnmoor Tarn.

Looking across the tarn to Burnmoor Lodge.

Looking back up to Scafell on the left and Slight Side on the right.

Looking across Wast Water to Yewbarrow.

The walk has taken us nine hours to complete. We drive back to Wastwater for a view of the screes.

Plus the usual view again.

So I am now glad to say that I have repeated all the 214 Wainwright mountains. Which once again comprises over 700 miles of walking and 230,000ft of ascent, that`s more than 8 Mount Everests! But this time I have achieved it in under 17 months! But then that is nothing compared to the great Joss Naylor who in 1986 completed them in 7 days!