The last time we visited Crete we walked the Samaria Gorge which we thoroughly enjoyed so this time we did it again with Tom. The Gorge is the longest in europe at 18km (11 miles) long. It is formed by a river flowing between Mount Volakias to the west and the towering bulk of the heart of the Lefka Ori (White Mountains) to the east. It is a steep cavernous ravine with spectacular scenery and rock formations and leads down to the sea. There is no way out at the bottom except by sea, or to return all the way back up the gorge. The start of the gorge has an altitude of 1,235m (4052ft). Being out of high season it was a lot quieter than last time. No having to walk behind the SMG`s (Slow Moving Germans), although after 15 years we had probably become SMB`s, as it took us an hour longer than last time to walk it!

The coach picked us up from our hotel at 5.55am, we were travelling with some Dutch people and, darn it, the SMG`s!!!! We stopped off at a Taverna on the Omalos Plateau but were ready to start the walk from Xyloskalo at about 8.40 am.

The intrepid walkers at the start of the walk with the gorge behind.

View down the gorge.

View up to Mount Gigilos..

Small cairns on rocks keep walkers on the right track. 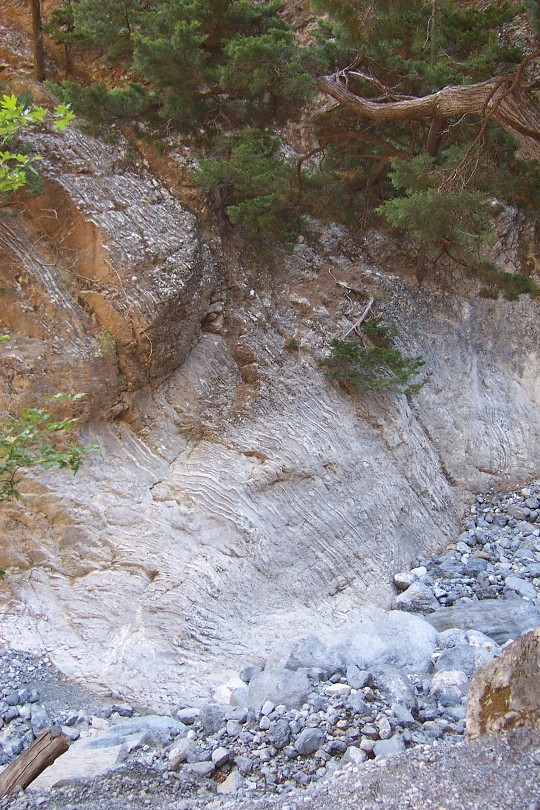 There are some superb rock formations as you go down. 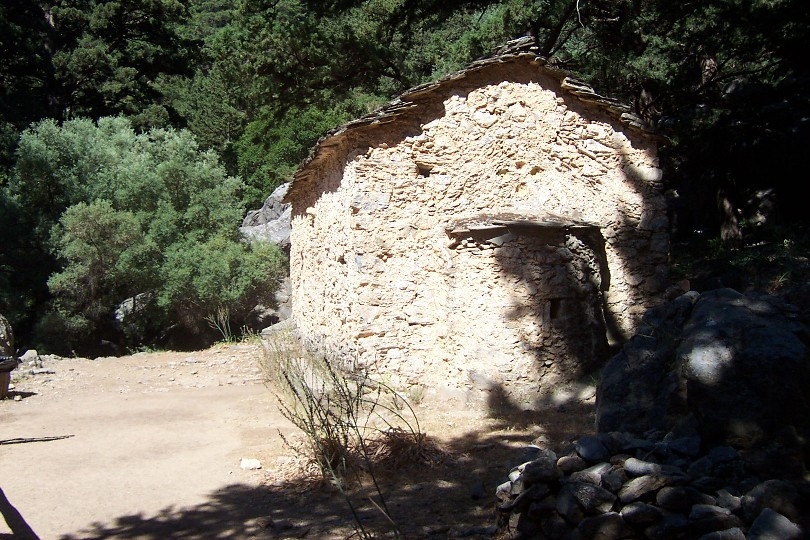 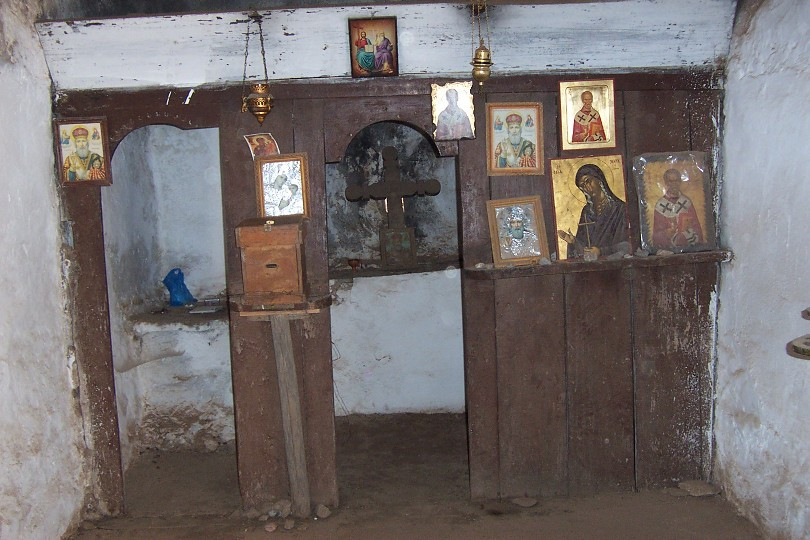 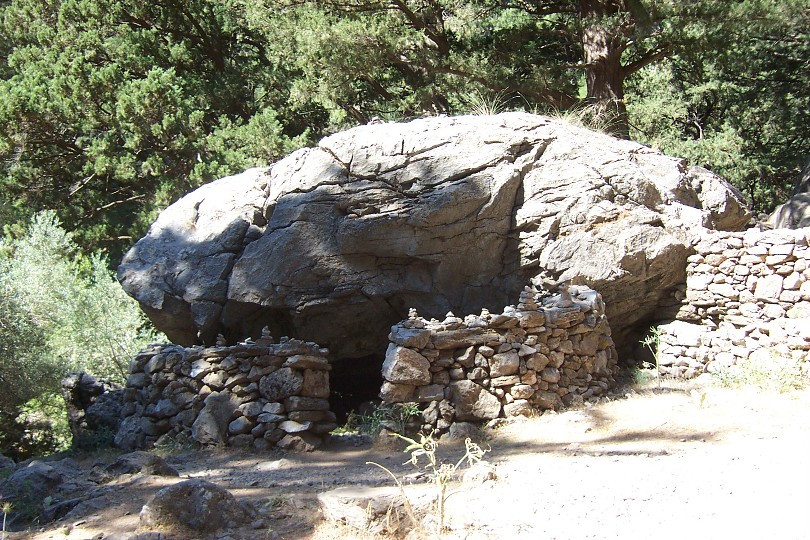 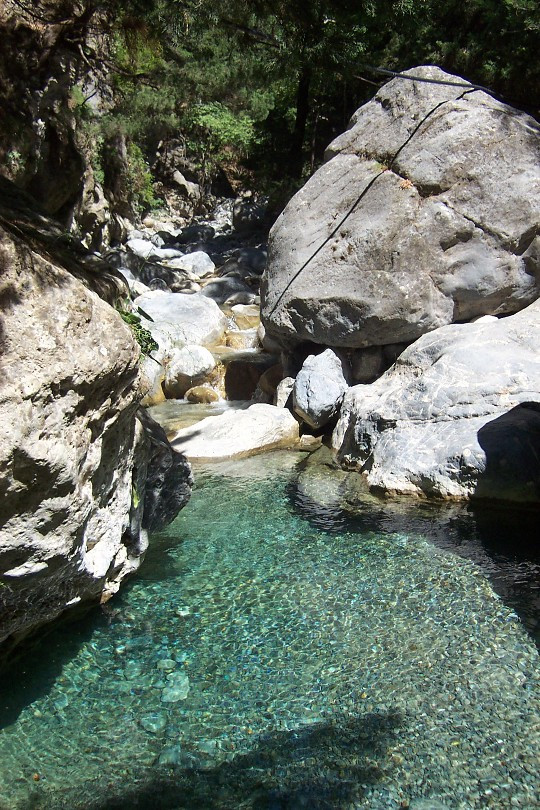 One of the main pools inbetween the boulders. 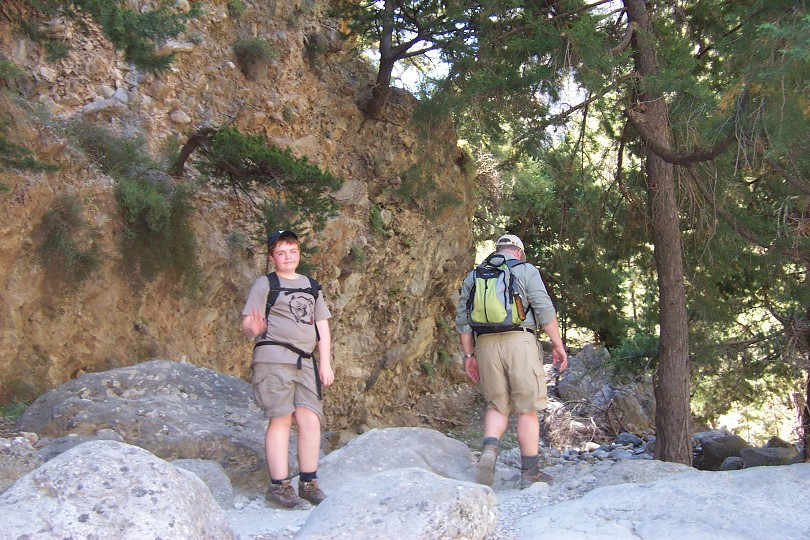 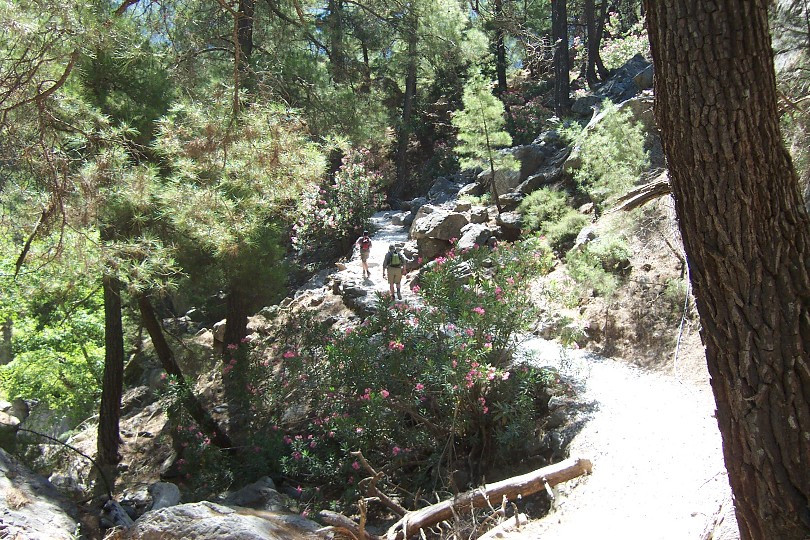 A bit that goes up!

Out of the shade the temperature soars.

Heading for the abandoned village of Samaria.

Tom crossing the bridge to Samaria.

Mules are the only transport in the gorge and are to ferry the injured either up or down for evacuation by helicopter..

Samaria was abandoned in 1962 when the area became a National Park.

It is 7km in, and a good place to stop for lunch.

..and a snooze! Water is plentiful in the gorge so we could fill up our bottles as we went.

A goat was very partial to our biscuits!

We stopped for about 40 minutes before heading off again.

Looking back at the ruins of the village 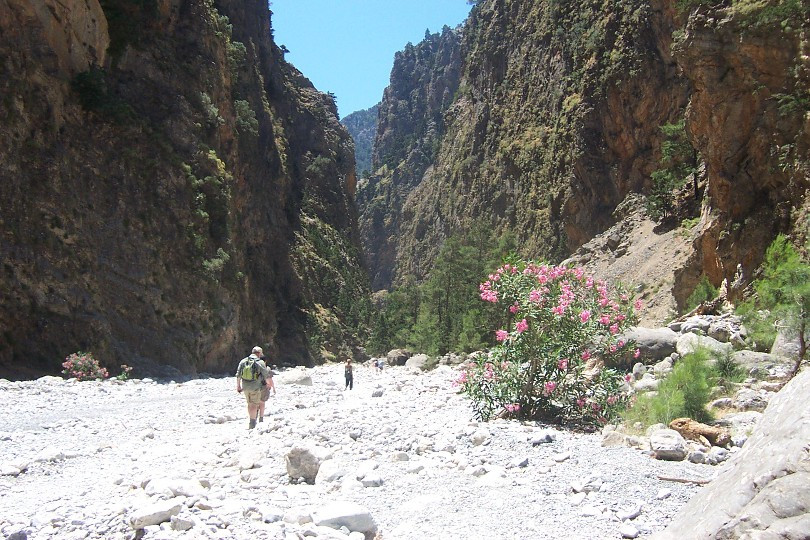 The pictures cannot show the true height of the surrounding rock. It was now very hot out of the shade on the river bed, approaching 40C and very rough walking. 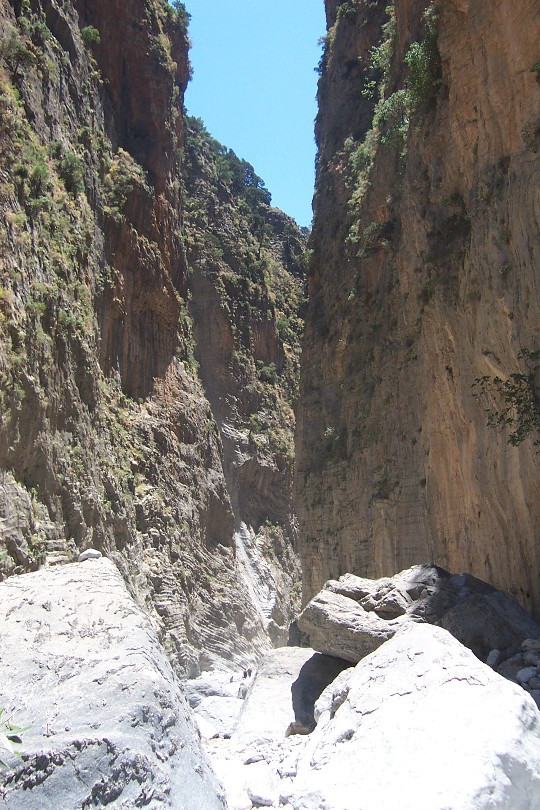 We met up again with the ladies who took our photos at the start cooling their feet in the water. 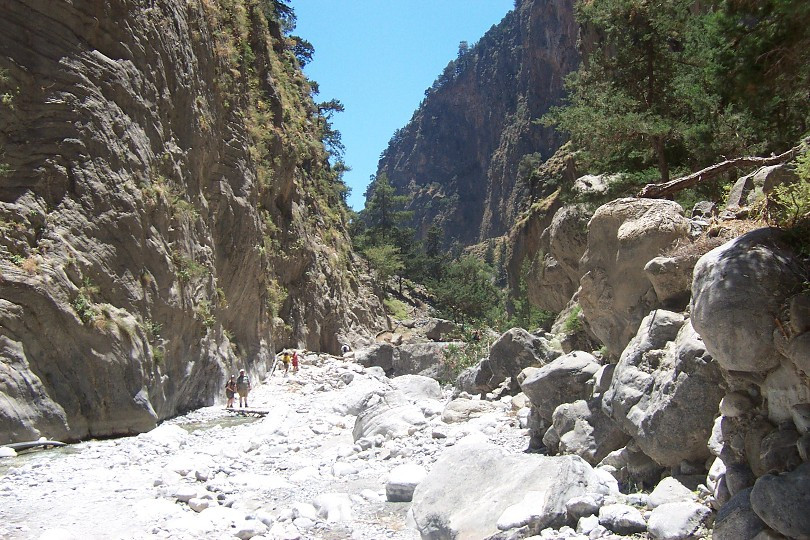 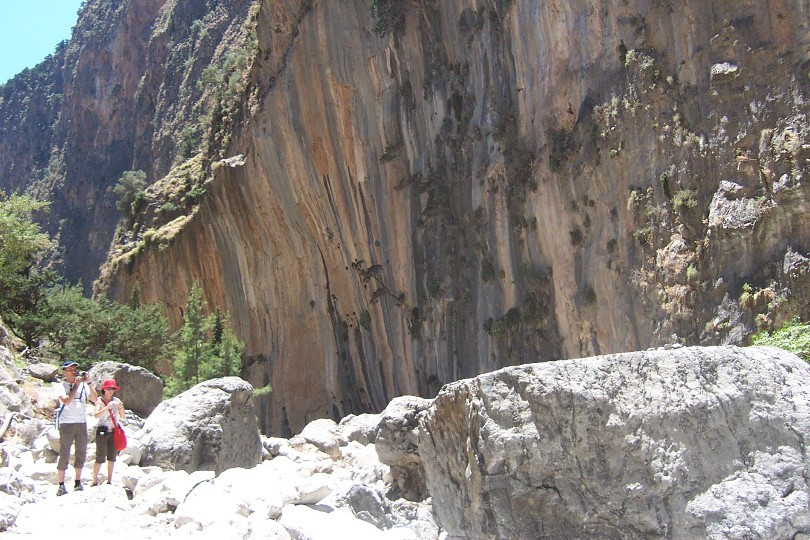 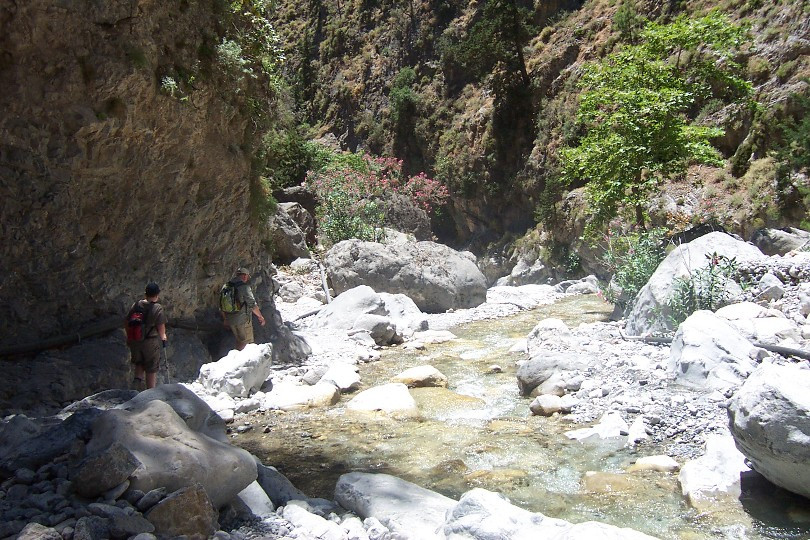 Approaching the Iron Gates where the width of the gorge is only 3m across. 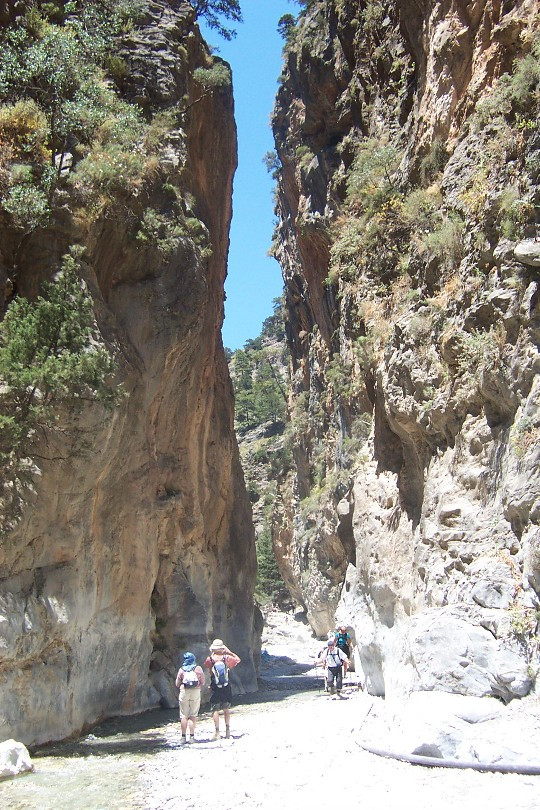 Looking back at the Iron Gates. 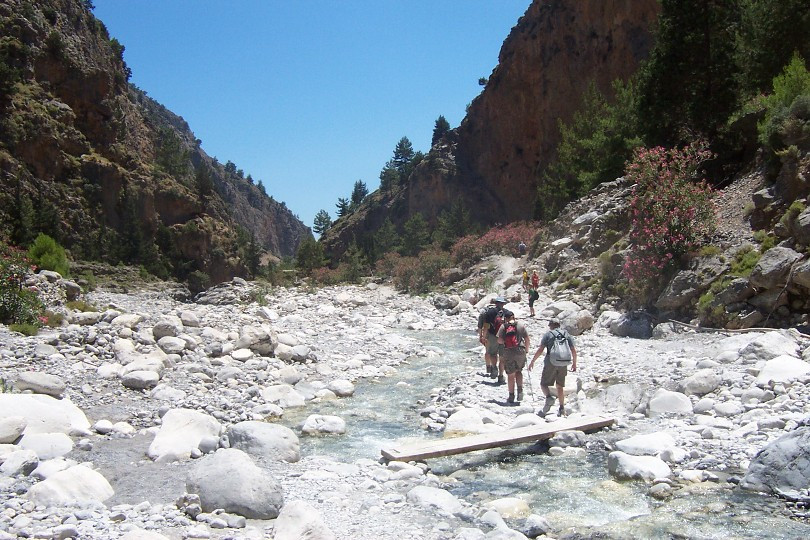 Still a long way to go to reach the village of Ayia Roumeli. 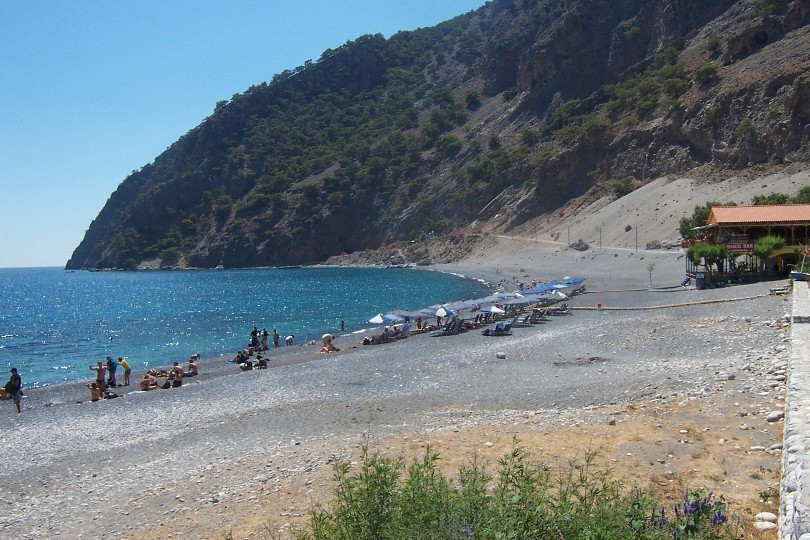 We stopped off at the old village of Agia Roumeli for a cold beer and an orange juice, but it was still 2km to the sea and the new village. Eventually, after six and a half hours we made it! 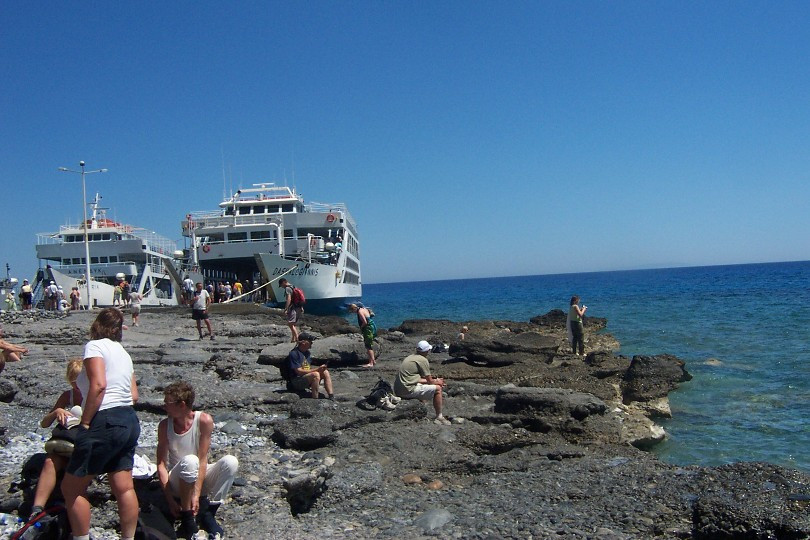 On the right our boat to Chora Sfakion due to sail at 3.45pm.

Tom remains in a Taverna with his cold drink and throbbing feet, Brendan cools his in the Libyan Sea. I wander about seeing what there is to see. 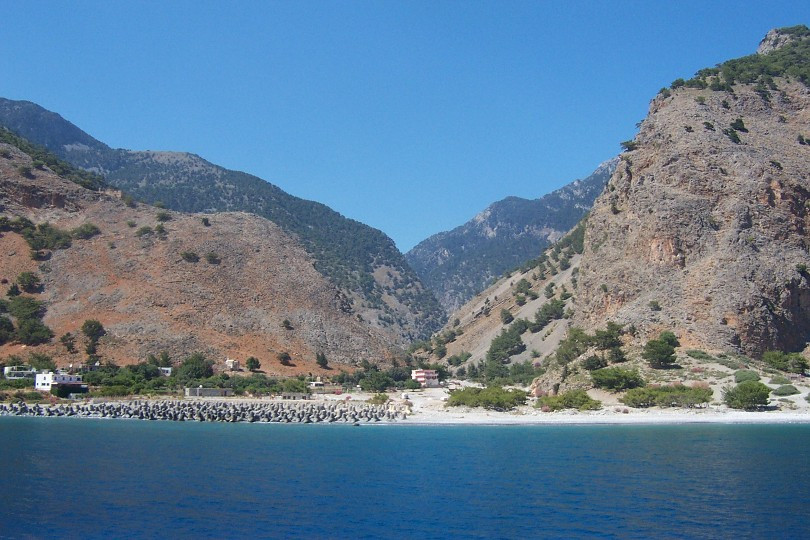 From the boat looking at the end of the Samaria Gorge. 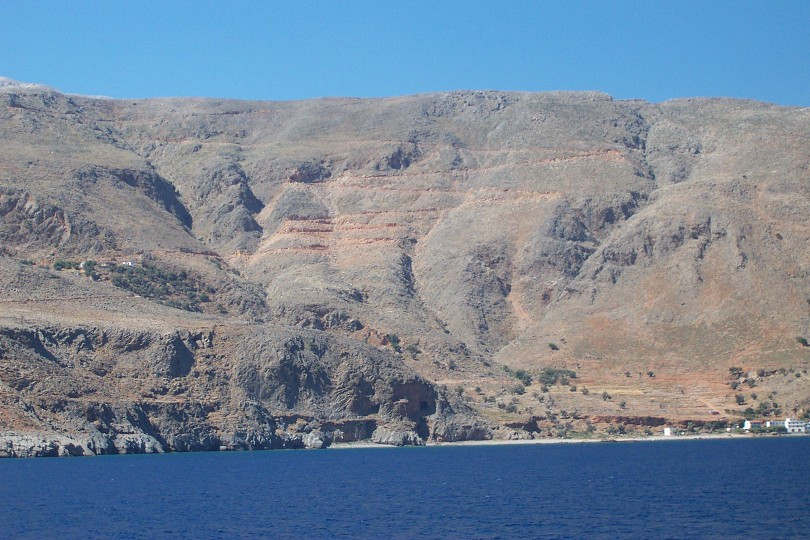 Path down the mountain side and caves.

The isolated village of Loutro. 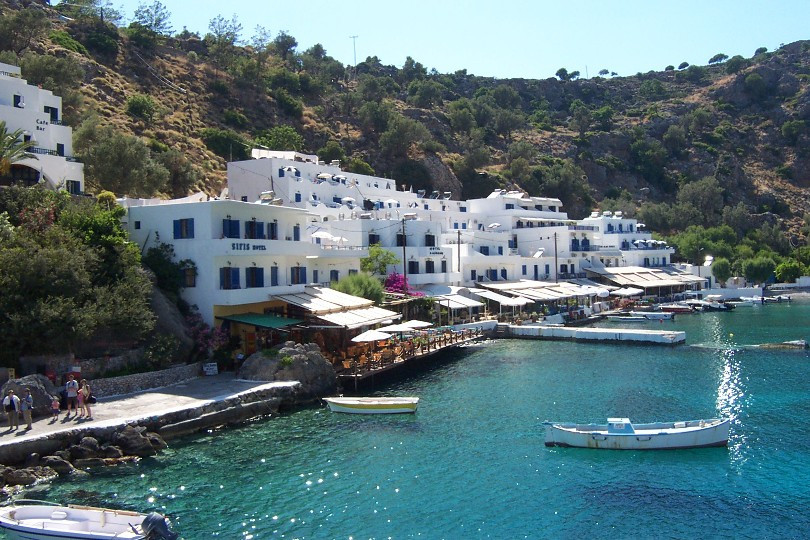 The boat stops at Loutro. 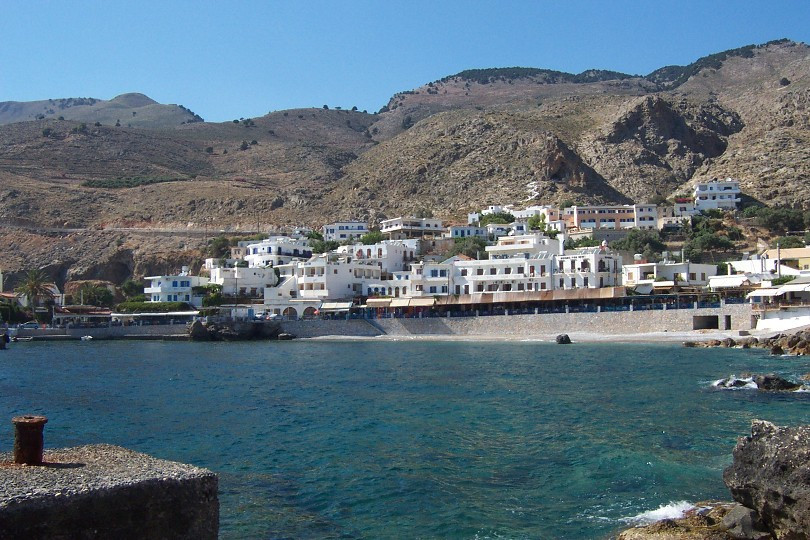 Then sets off for our destination of Chora Sfakion. 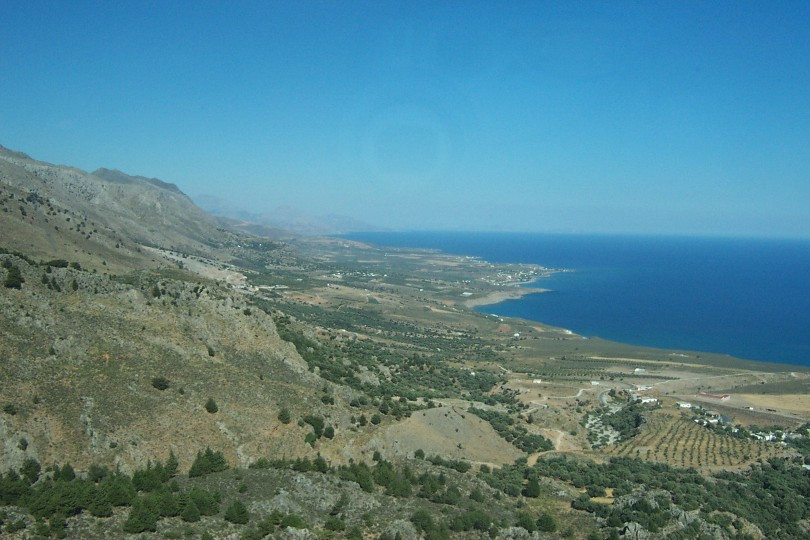 View out to the Libyan sea.

We were dropped off at our hotel and after a shower went off to the Old Town of Rethymnon for a well deserved meal. Just in case you were wondering, no, I never missed any of the footy, the Taverna had the early game, and we were back in the hotel bar or our room in time for the 9.30pm kick-off.