This year’s theme for the Dalton Christmas Tree Festival is ‘Let’s go to the Cinema’. There are 48 decorated trees sponsored by community groups in order to raise money for various charities. The Festival in St. Mary’s Church, Dalton-in-Furness, is open each Friday, Saturday 2-6pm and Sunday 2-5.30pm, through to December the 27th. £1 admission. 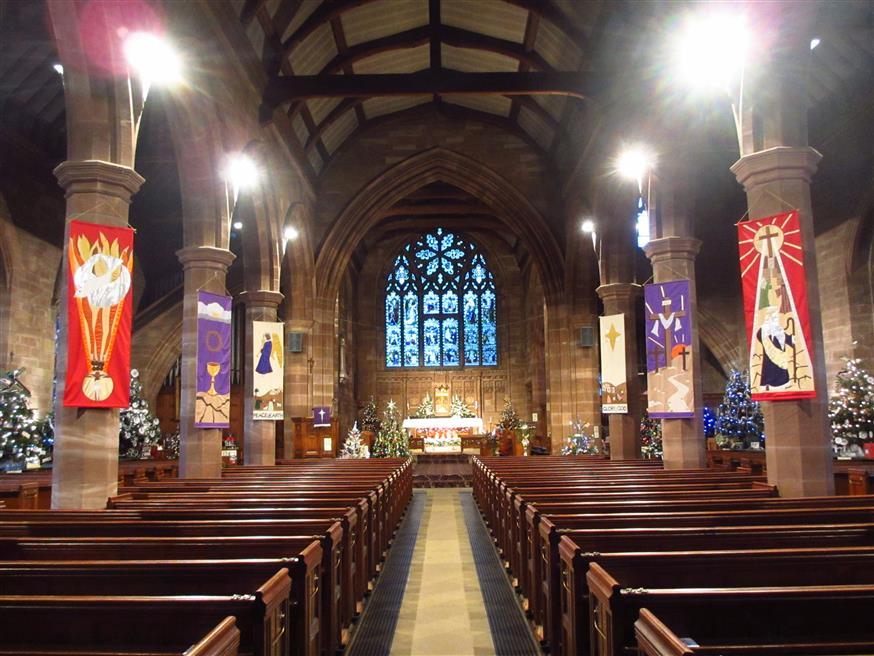 I took these photos of the trees before service ringing on Sunday morning. 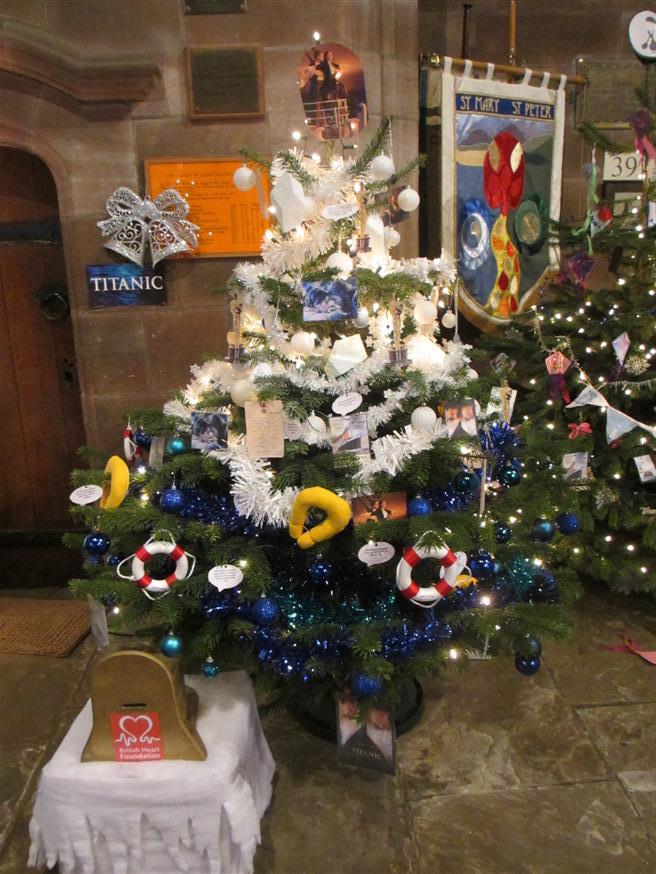 Tree number 40 is the Bell Ringers' tree, situated right outside the bell tower door. We got 'Titanic', a film about a sinking ship. If it raises lots of cash for the British Heart Foundation I can live with the analogy! 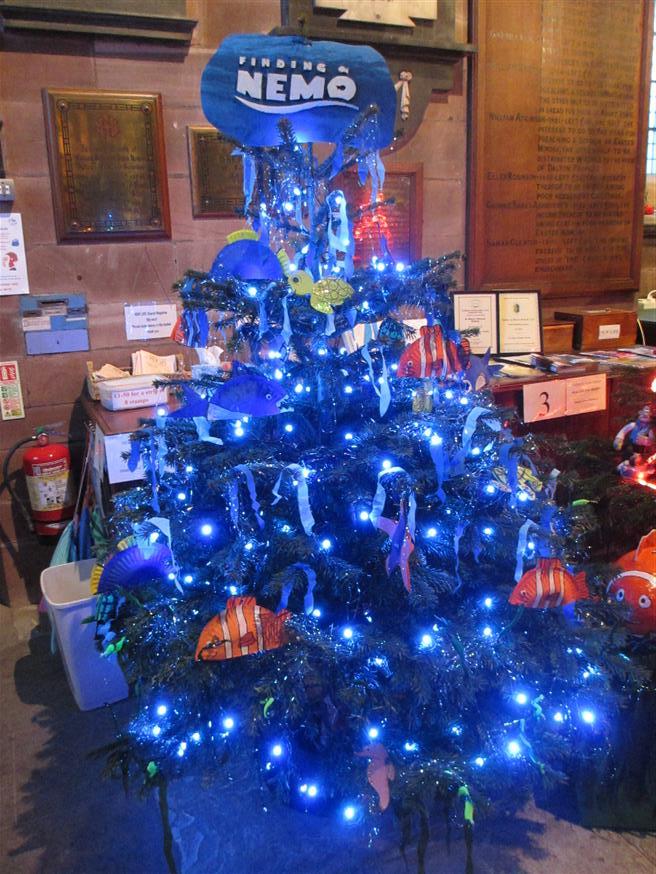 'Wallace and Gromit' by the Ist Duddon Scout Group for the benefit of Scout Resources.

'Star Wars' by Mandy Allonby for Combat Stress. Last year she did 'Dr. Who', obviously a Sci-Fi fan!

'Keep It Reel' by Dalton Town Band for Band Resources.

'Miracle on 34th Street' by St. Mary's Church Choir in aid of The Croft, Barrow.

Our furry friends are back again. 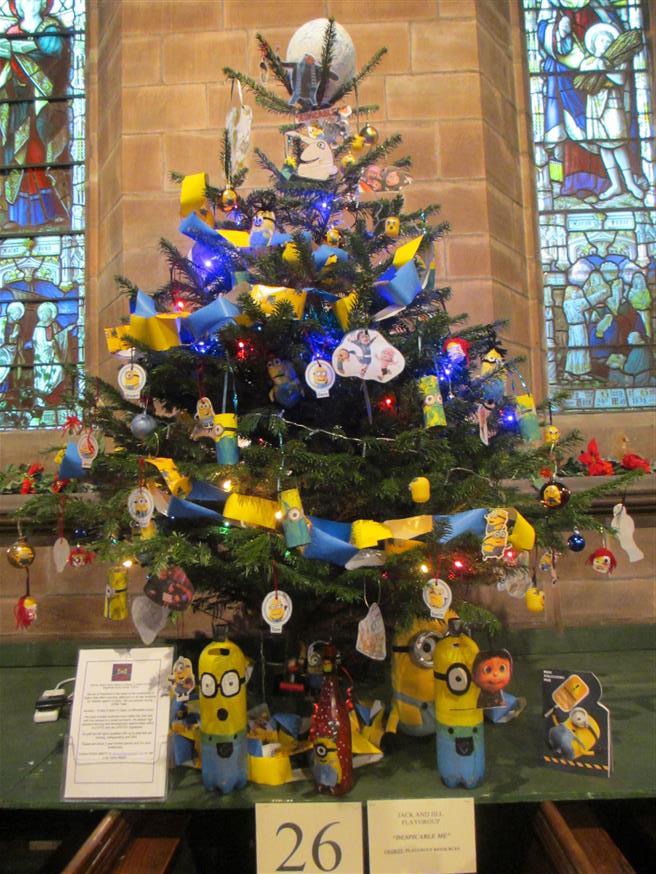 'Despicable Me', Jack and Jill Playgroup for Preschool Resources.

Laurel and Hardy 'Way Out West', Soroptomists International in aid of North West Air Ambulance. I think the middle bit represents the Blue Ridge Mountains of Virginia......on the Trail of the Lonesome Pine......I bet you're even singing it now! 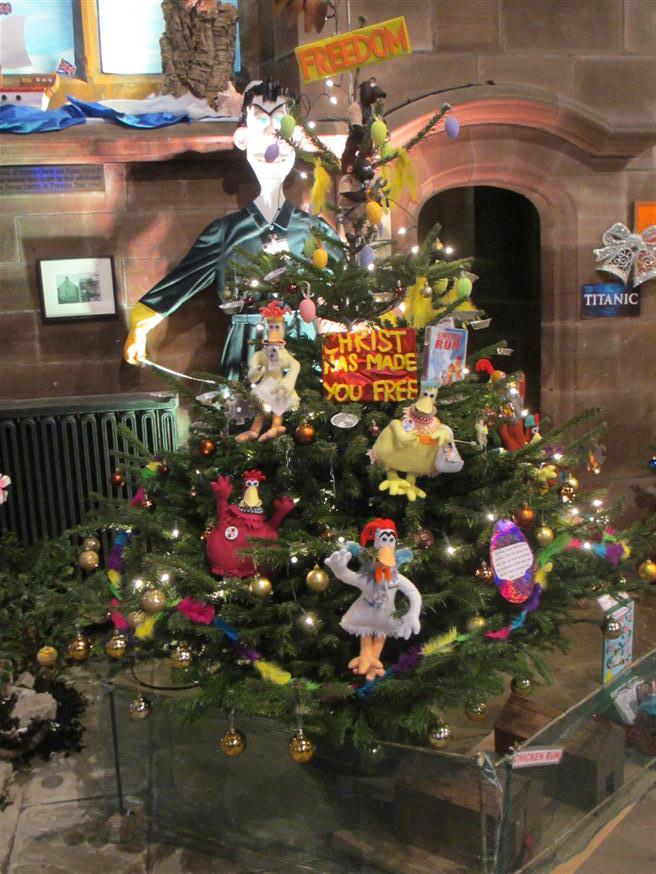 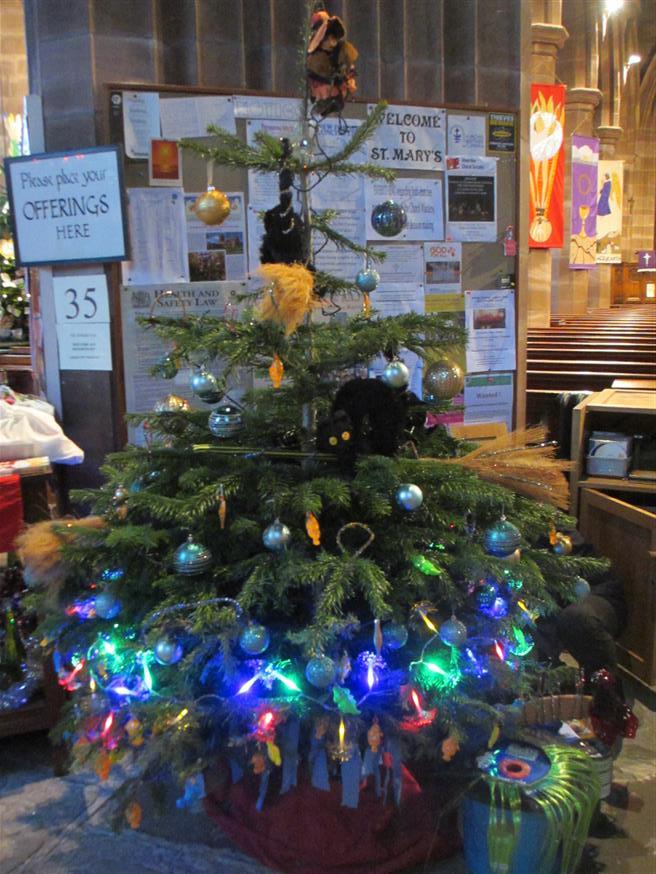 'Bedknobs and Broomsticks', the Samaritans.

In the Parish Centre 'The Lego Movie' by Connecting Mums in aid of Post Natal Support.

On the font steps 'Harry Potter' by Maisie Allonby for the Bluebell Society.

In the afternoon we rang from 3pm until 4.45pm for the Dalton Christmas Lights Switch-on Procession with refreshments of mince pies and hot mulled wine supplied by Carl. 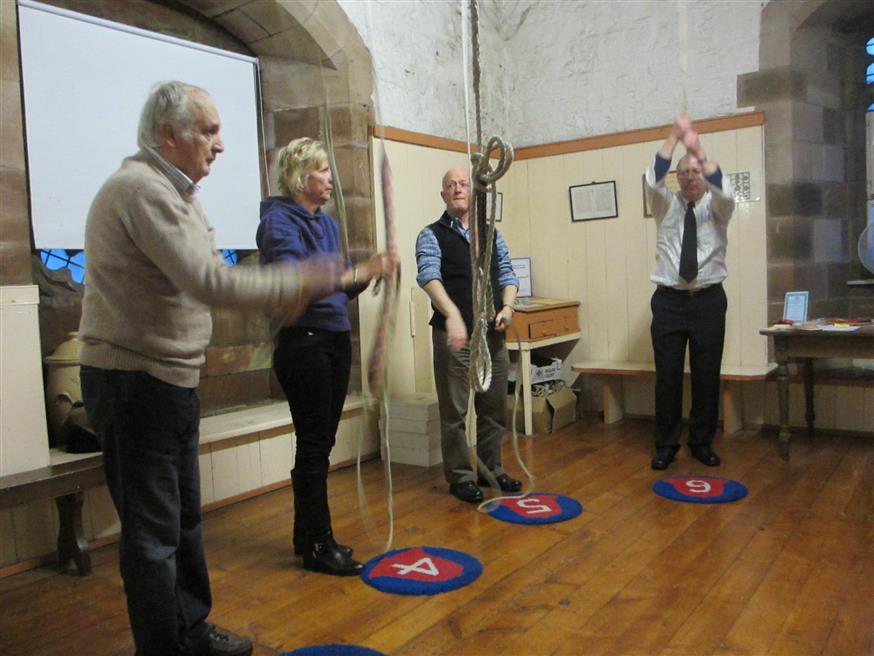 The old favourites of Call Changes on 10, Grandsire Triples, Stedman Triples, Oxford Bob Triples and Plain Hunt on nine rang out for all to hear. 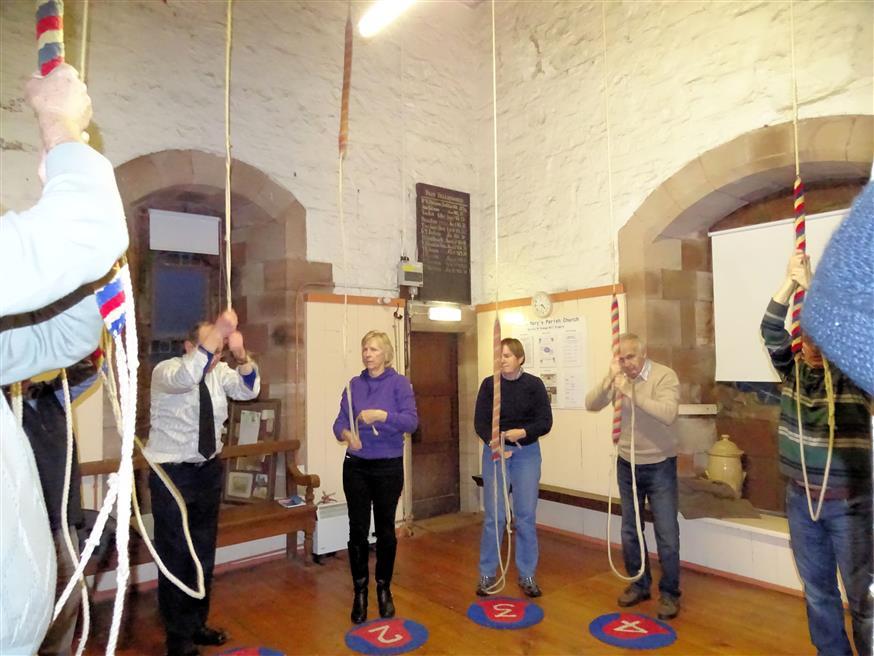 Owen took these next two photos. 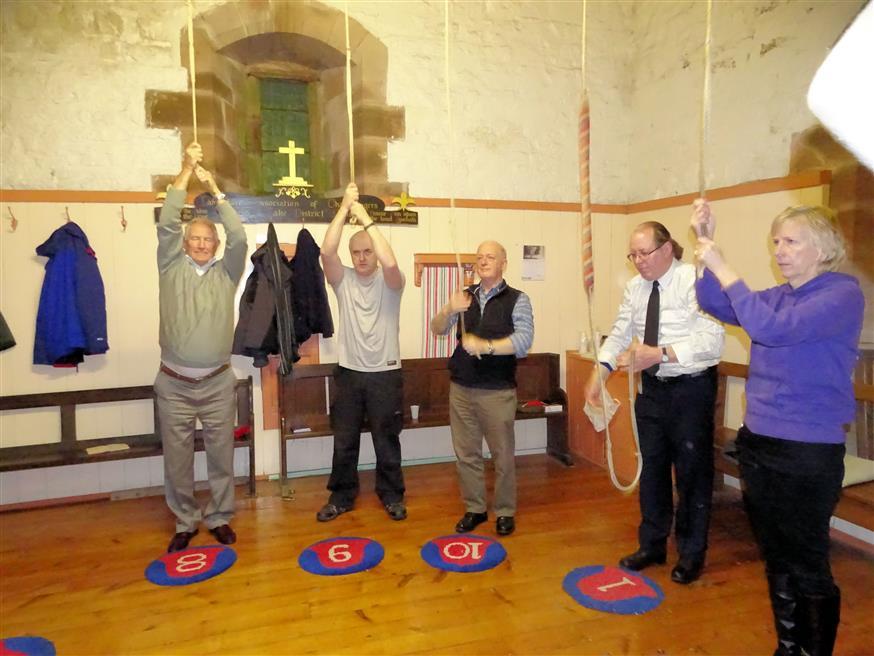 As it was blowing a gale outside, I did not hang around for this year's procession but decided to head home and watch the second half of the Arsenal game instead! 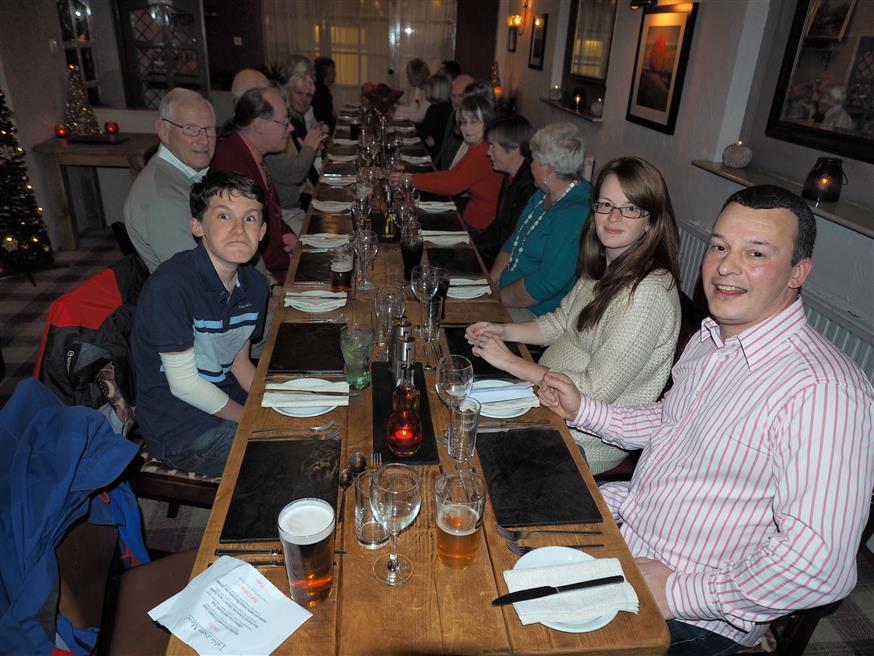 On Friday the Dalton St. Mary's bell ringers got together for a dinner at the Red Lion in Dalton, organised by Carl. The pub had provided us with a special three course menu for the occasion, which was excellent. (AP) 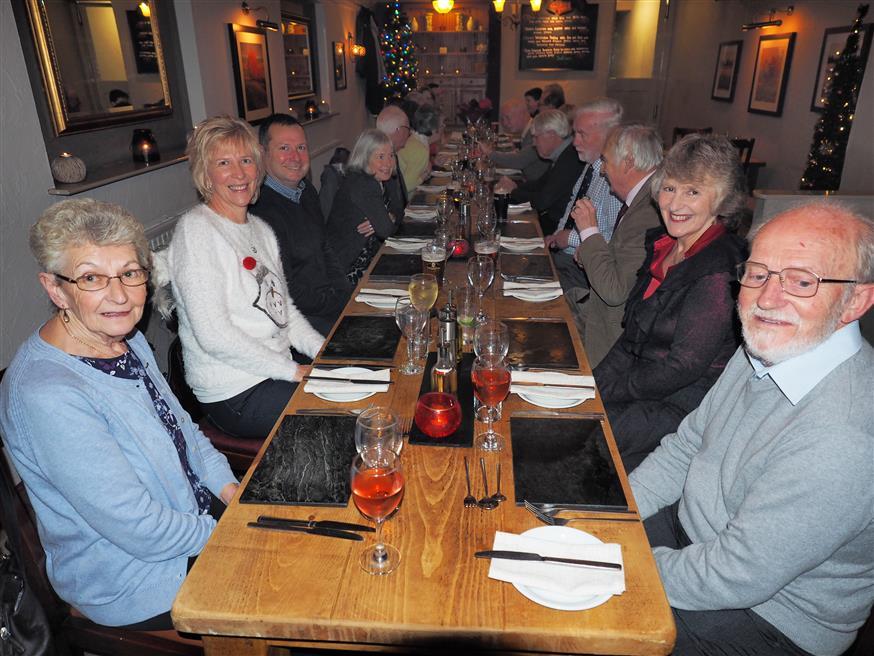 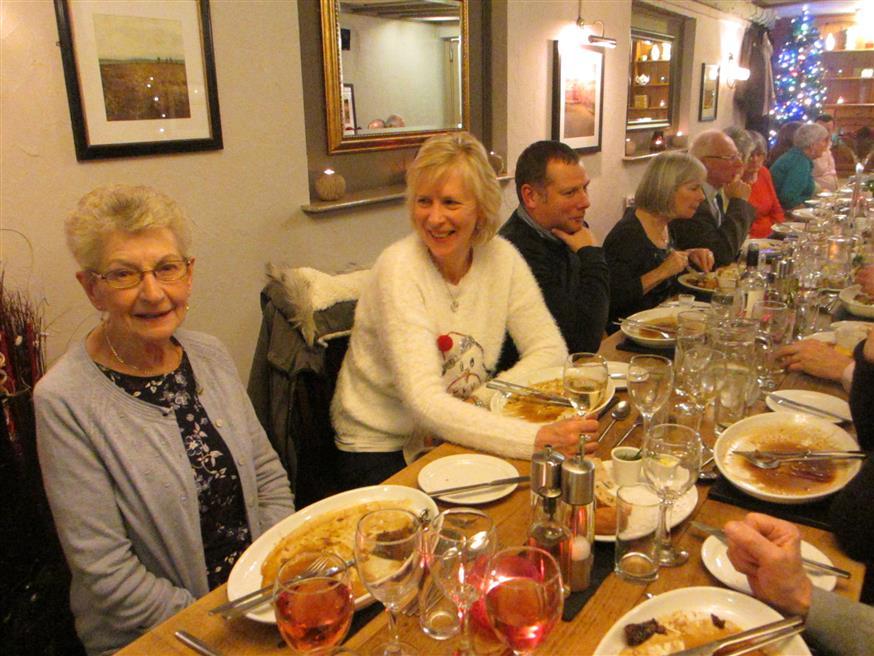 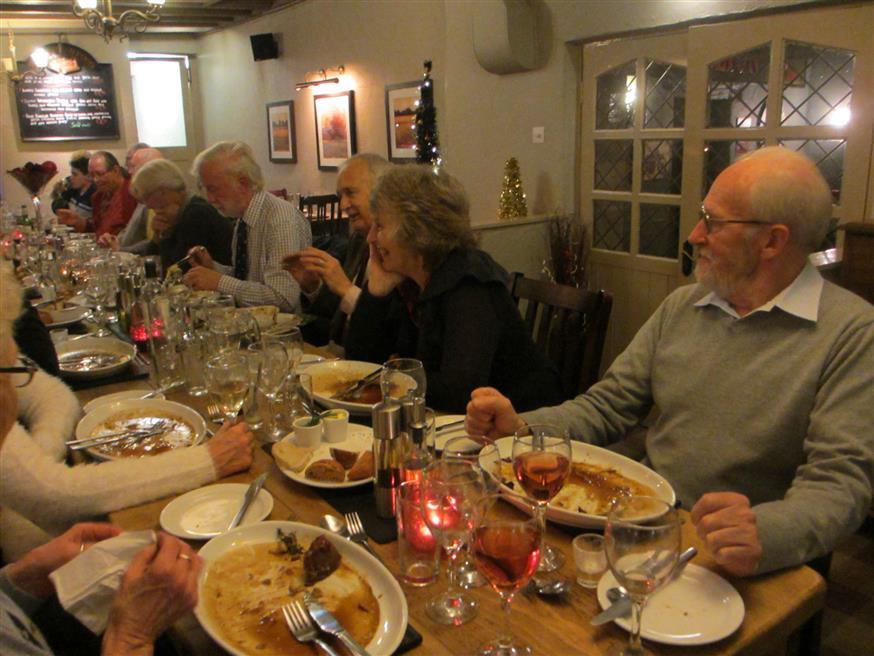 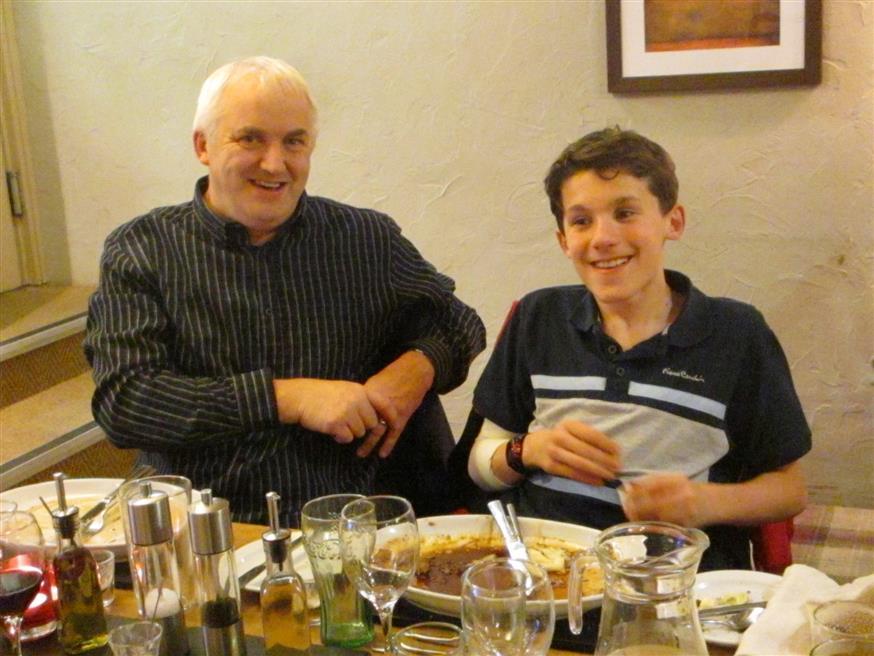 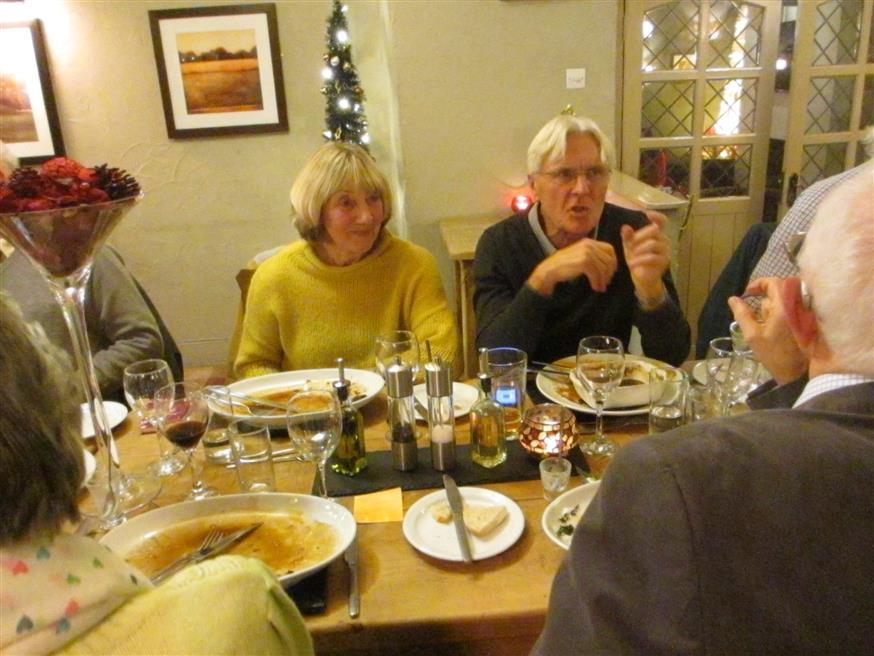 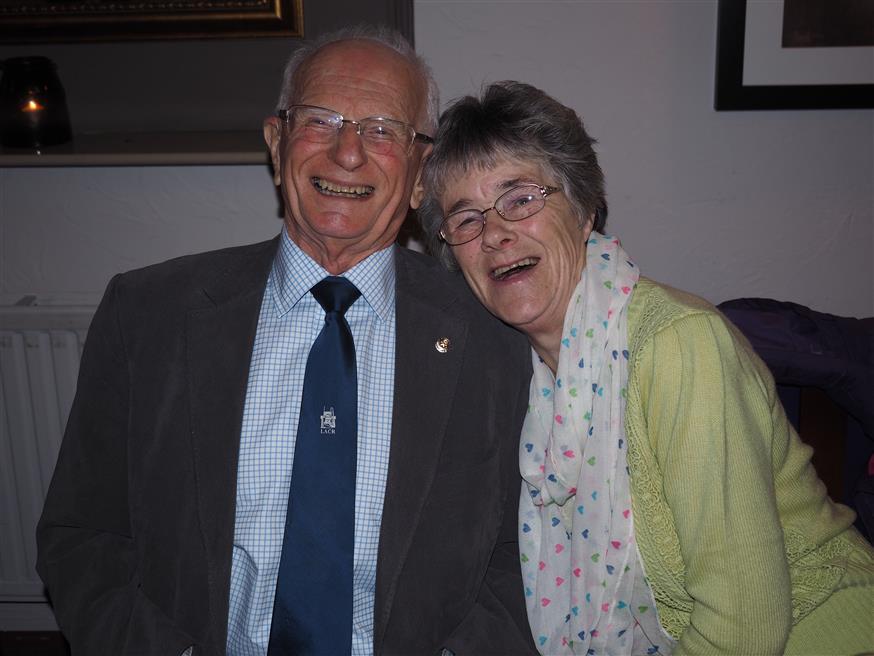 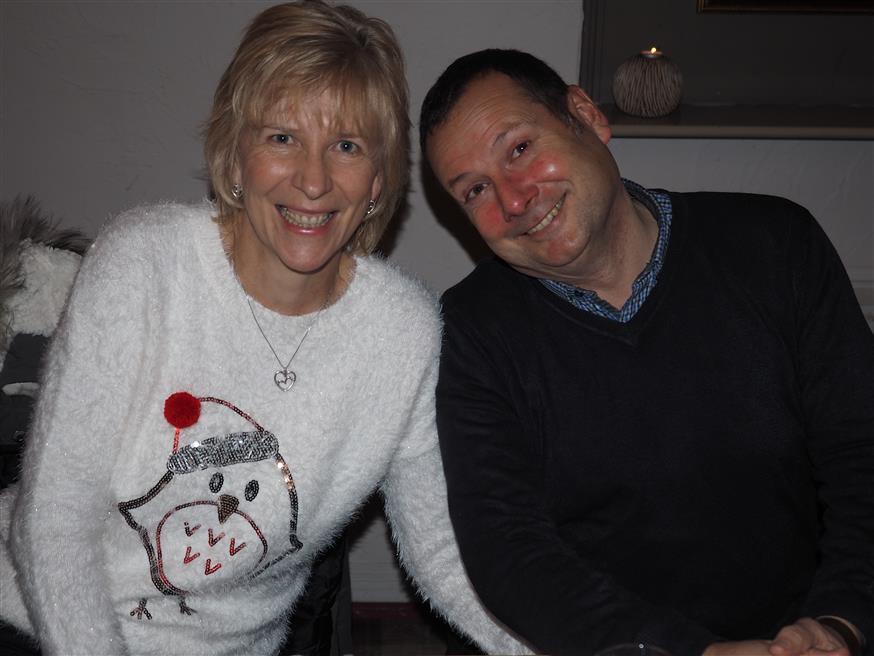 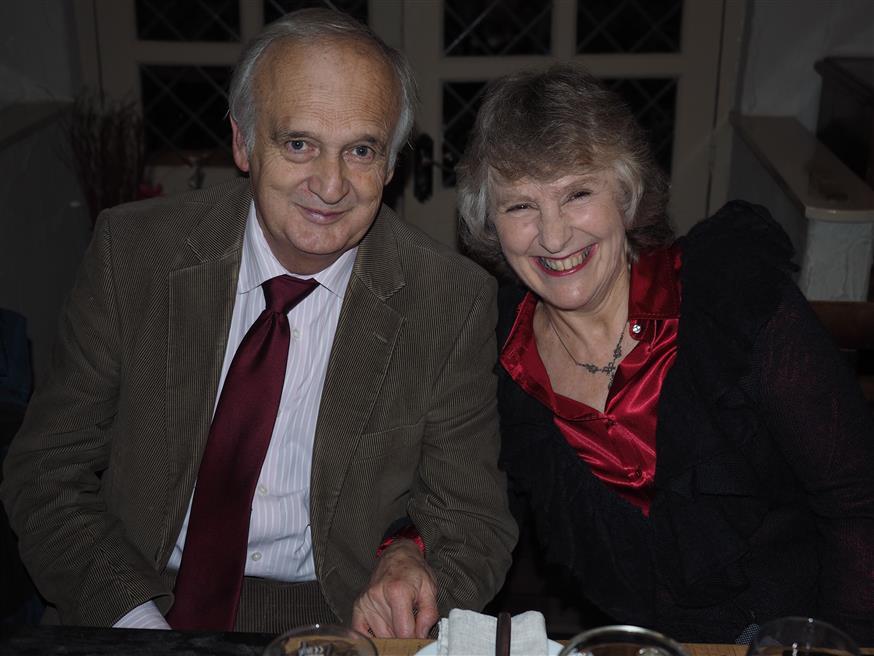 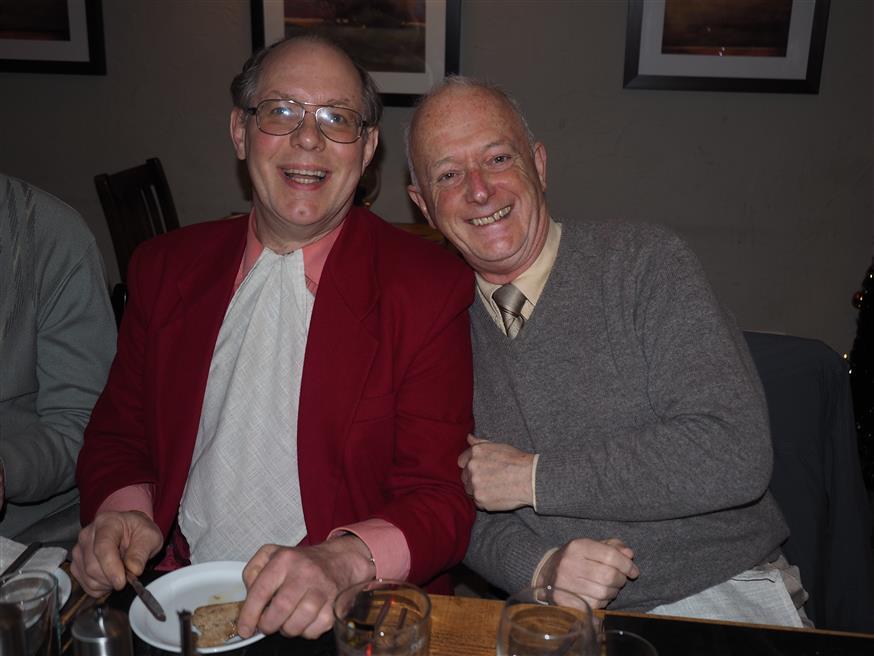 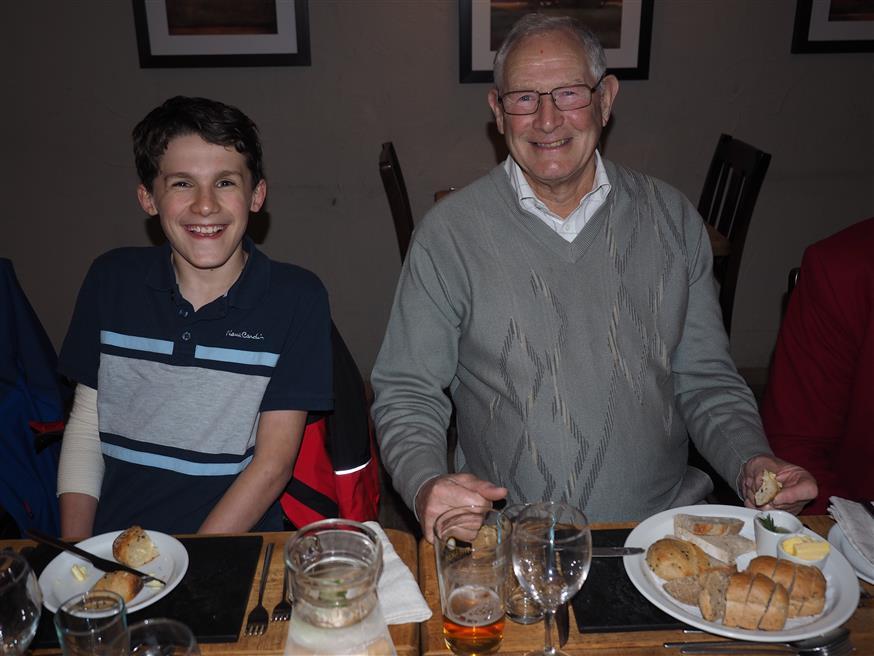 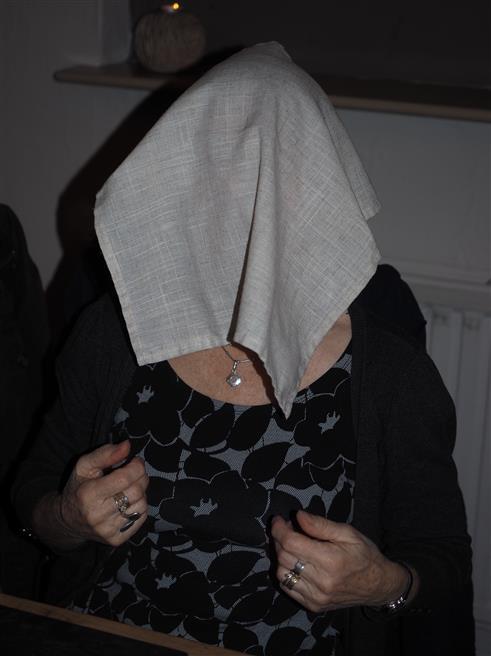 Linda, looking as lovely as ever! (AP) 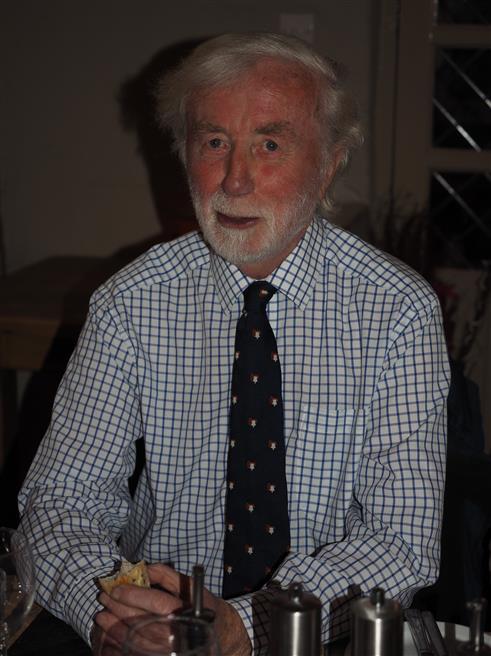 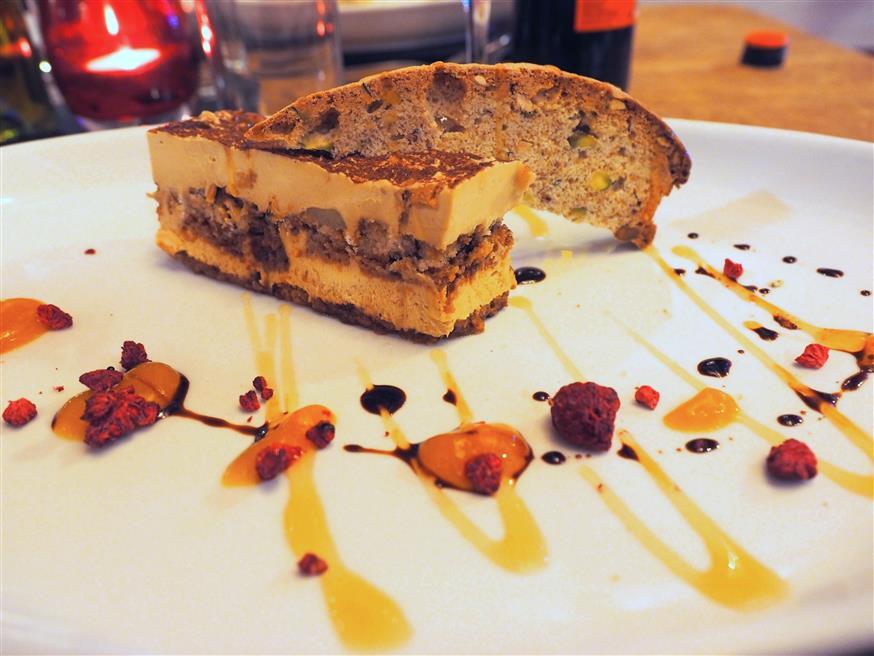 Tiramisu with Biscotti. Next up after the dessert came the 'entertainment'...........(AP)

Austerity hits Dalton St. Mary's Bell Ringers as we are forced to downsize! Of course, the upside of ringing hand bells is that they can be rung inside a pub!

Stan gathers his eight victims to ring an assortment of Christmas Carols. The rest of us play 'Name That Tune', by the end WE were improving! 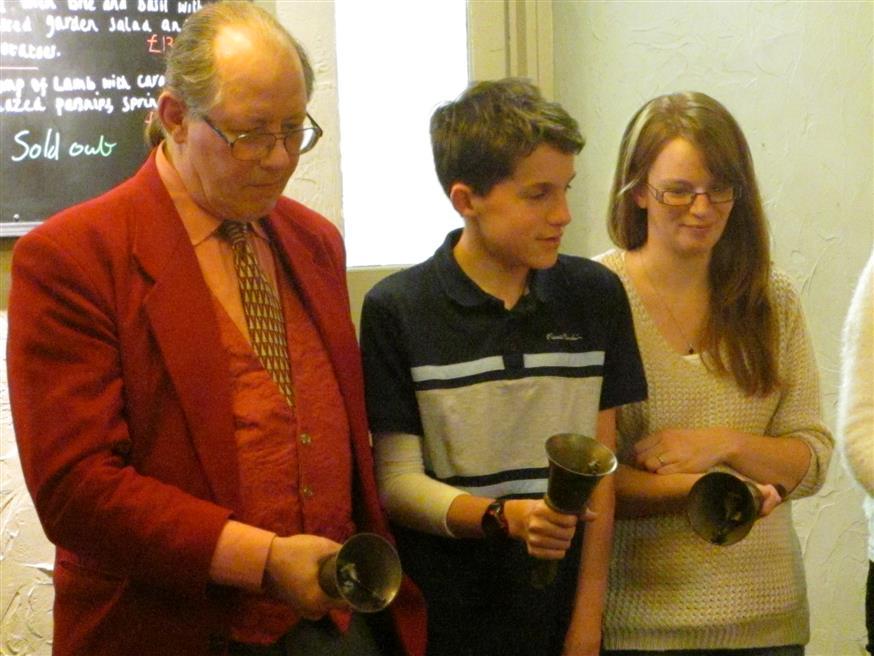 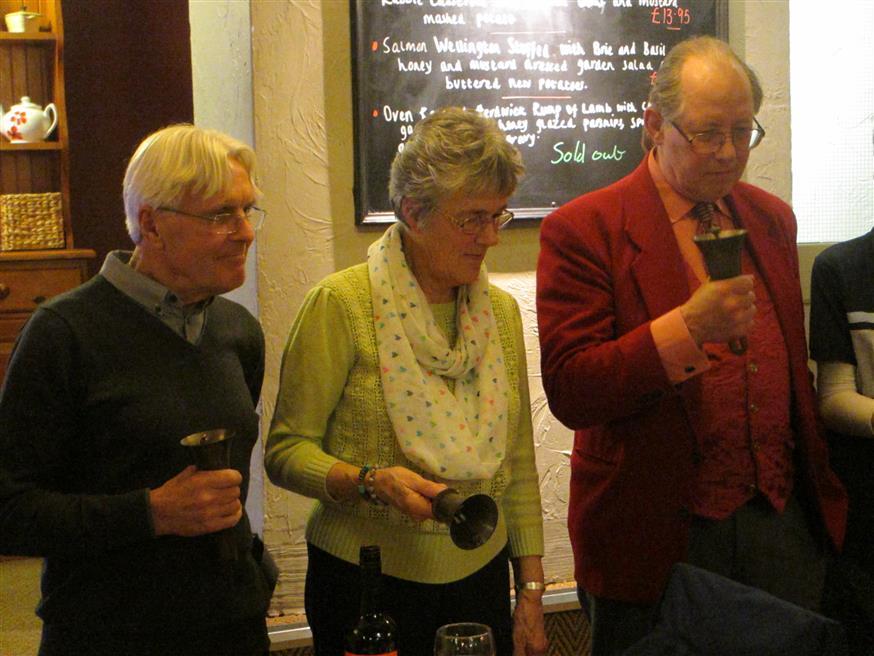 An excellent evening was had by all.......well, maybe not the other Red Lion customers! 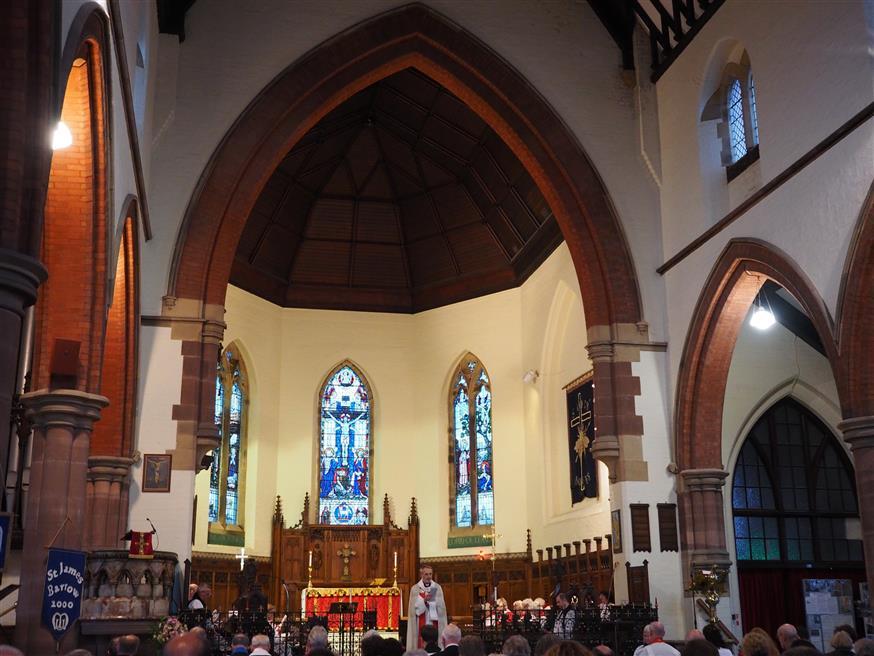 After ringing we joined the service given by The Right Reverend Robert Freeman, Bishop of Penrith. (AP)

Jennie Dennett, a reporter from BBC Radio Cumbria, came to Bell Practice at St. James', Barrow last Wednesday evening. She had visited the Barrow Bells website and had noticed that we would be ringing for a special service on Saturday to mark the licensing of St. James' new vicar, Jack Knill-Jones. She thought the service would provide a good hook to do a feature about bell ringing as part of her 'Up For Arts' project.

L-R: Paul Bradley, Jo Sweeney, Andy Pollock, Beryl Jefferson, Sue Fryer, Jennie Dennett, Andy Painter, Owen Osmotherley, Alan Jones, Keith Newby. Tower Captain, Andy Pollock, gave Jennie a tour of the tower and later, once the main practice had started, she visited the viewing platform above the bells to record and video them while we were ringing Grandsire Doubles. This video is now on the BBC Radio Cumbria's Facebook page. Jennie had a go at ringing the backstroke on the 3rd and did very well, remarking that it was easier than she thought! She interviewed several of the ringers and had a long chat with Keith Newby, one of our longest serving ringers. Keith was attending his first practice since dislocating his shoulder, nearly two years ago. A most welcome surprise! After the interviews Jennie then recorded a 120 touch of Grandsire Doubles in the ringing room itself. I was on the treble and I am ecstatic that I now have Andy, recorded for posterity saying "Well done Jo, note perfect!" In fact, I think I will make that my new 'ring tone'!

Although the report was shorter than we had hoped, it was both positive and entertaining. Andy is heard mentioning to Jennie that classic line: “When the bells are up they can kill”, needing only a deep American accent and incidental music from ‘Psycho’ to make the art of bell ringing sound REALLY scary! Andy was especially pleased that Iwan, our 11 year old ringer, both rang and interviewed well. The rest of us tried our best to get the salient points across in our interviews. One thing is clear, to increase recruitment, maybe in future we should advertise bell ringing as a free workout to music! Who needs Zumba?

Jennie’s report was broadcast on ‘The Richard Corrie Show’ on Saturday morning. It is still available to listen to:
http://www.bbc.co.uk/programmes/p037jv24
Go to 1.48…..we follow The Rolling Stones!

Thanks to Andy Pollock (AP) for the use of his photos and to Owen Osmotherley too.