The Fell Assessor has reported cloud inversions and Brocken Spectres on Helvellyn each day this week http://www.lakedistrictweatherline.co.uk This is the weather forecast I always use, so as today was forecast to be a similar day I drove to Swirls to climb up Helvellyn hoping the weather would be the same four days in a row! Like that was ever going to happen! 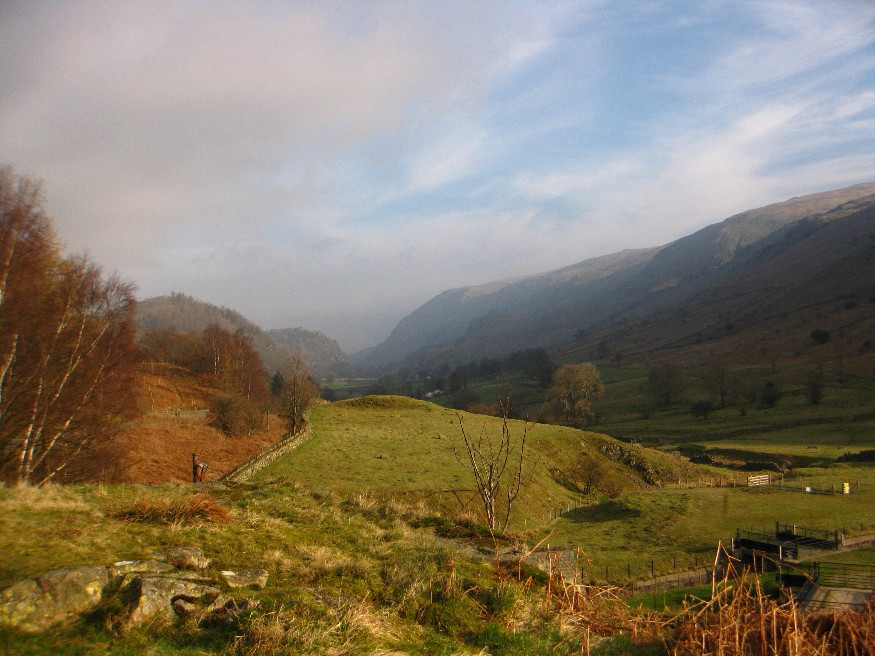 As soon as I hit the Swirls car park at 8.30am the sun came out and there were blue skies above Hellvellyn, but everywhere else was in cloud. Looking north in the direction of Blencathra. 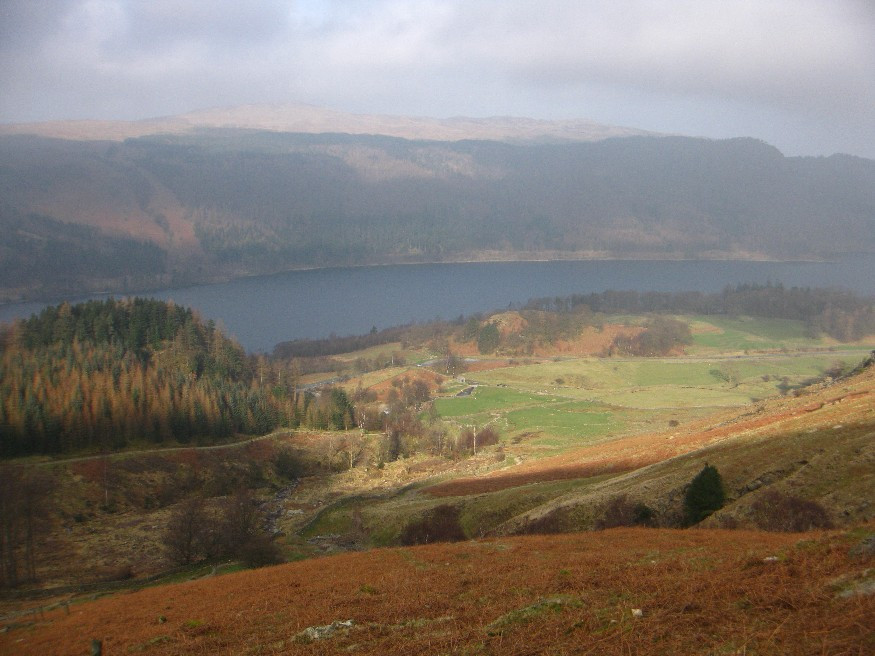 Looking down on Thirlmere. 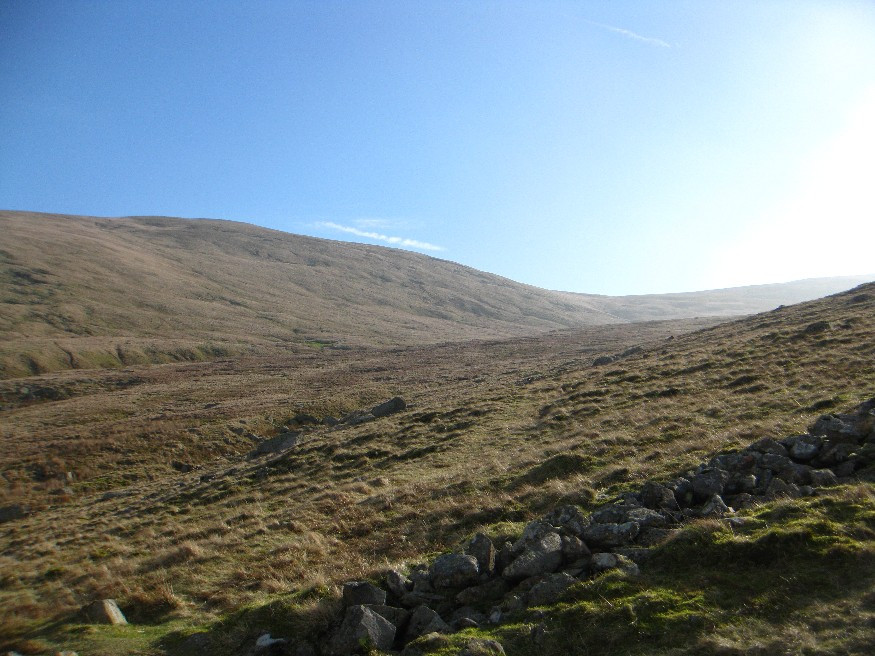 The slopes of Whiteside. 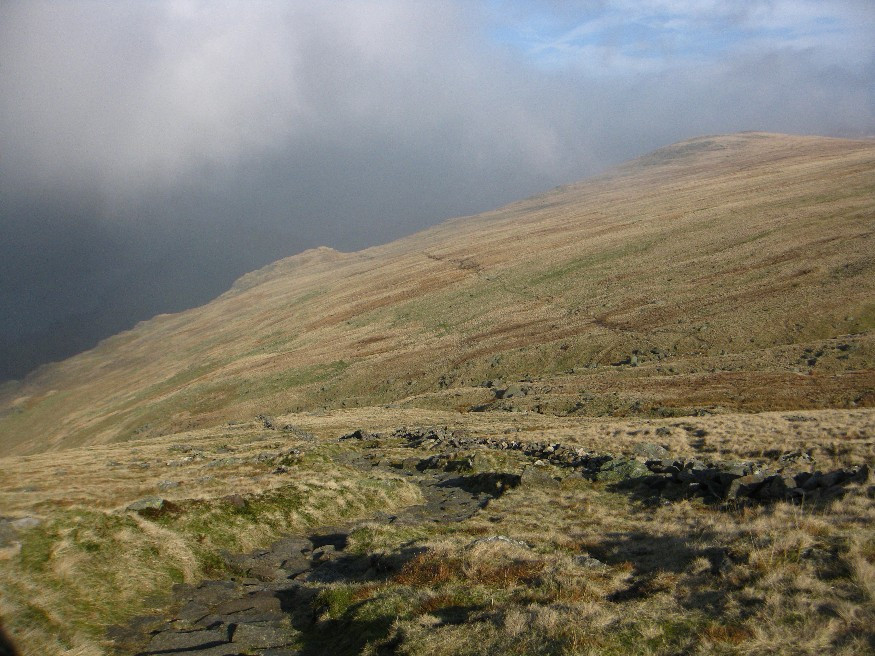 A cloud bank heading this way. 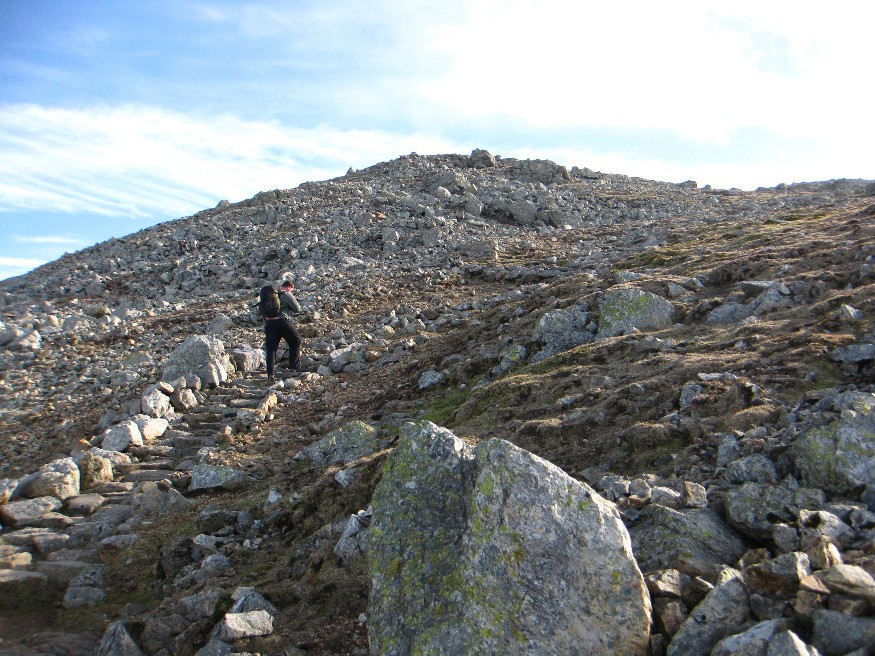 Approaching the summit of Brown Cove Crags. I was passed by three guys and a dog who were working on the Striding Head exit, blocking up shortcuts. They have to walk up here 4 days a week to work! Below is the straggler....not as fit as the other two! 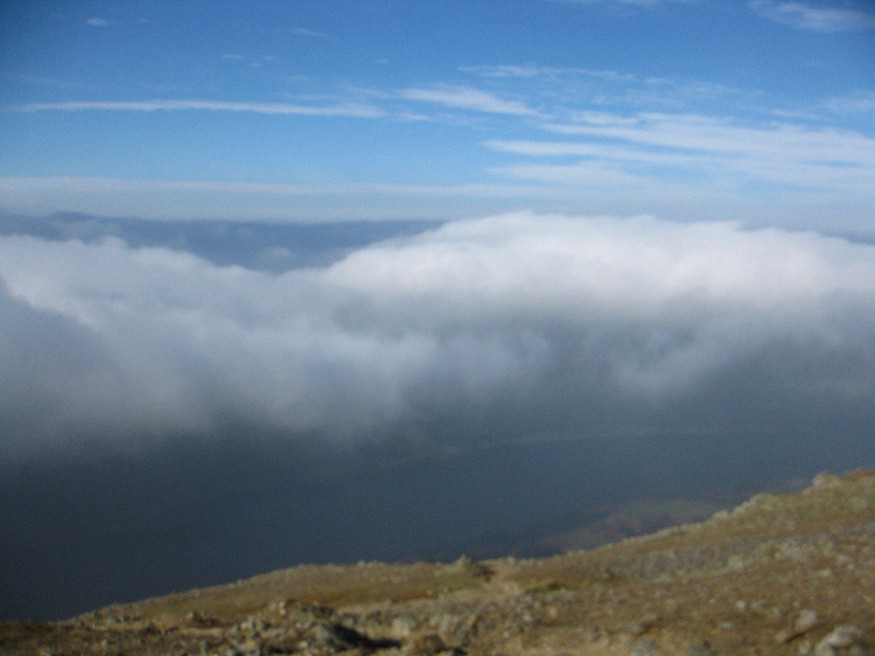 The cloud bank is heading in from the west. It is getting quite windy now....(Sorry for the blur my camera can`t focus on mist!) 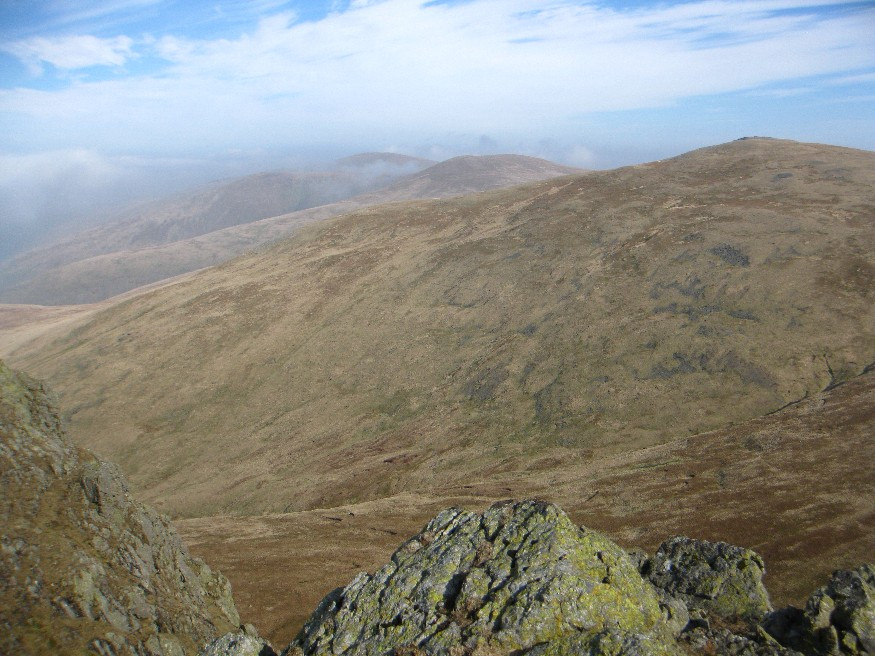 Looking along to the Dodds over Whiteside and Raise. 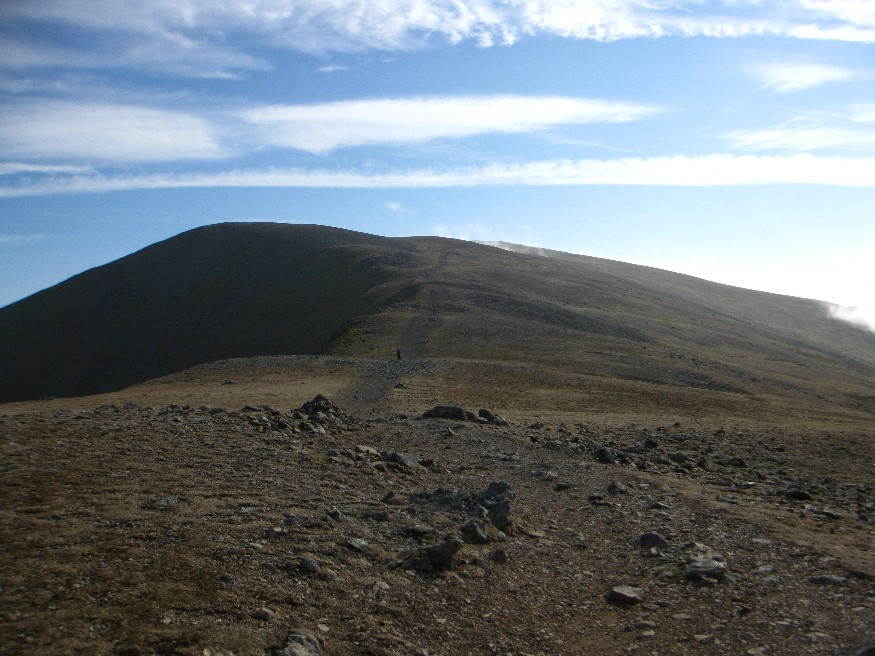 Approaching the summit plateau the cloud starts to drift over.....scroll right for panorama. 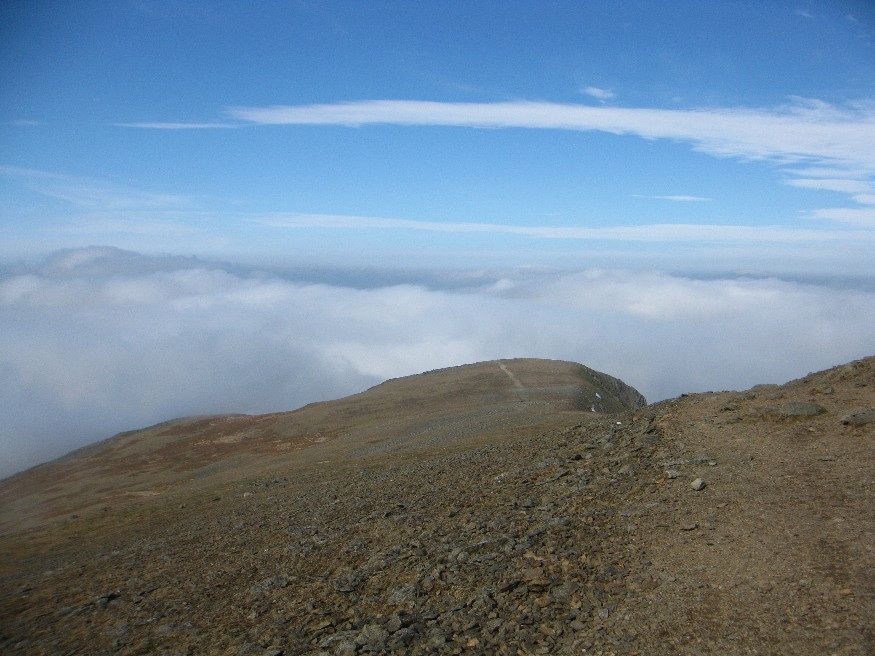 Looking back towards Brown Cove Crags, now I`m above the cloud bank.....for the moment! 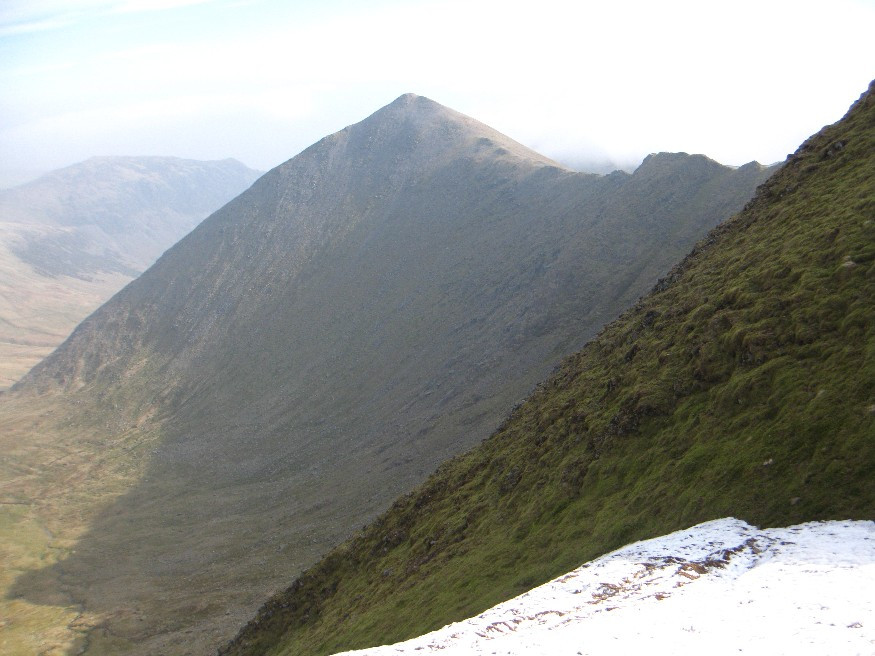 Looking over to Swirral Edge and Catstycam from the final climb up to the summit plateau. 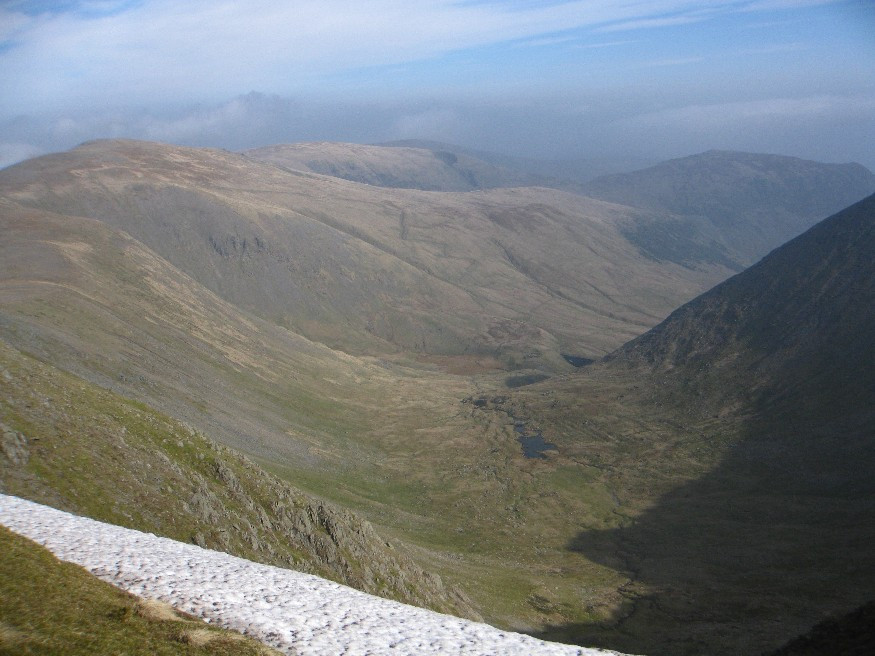 View down into Keppel Cove. 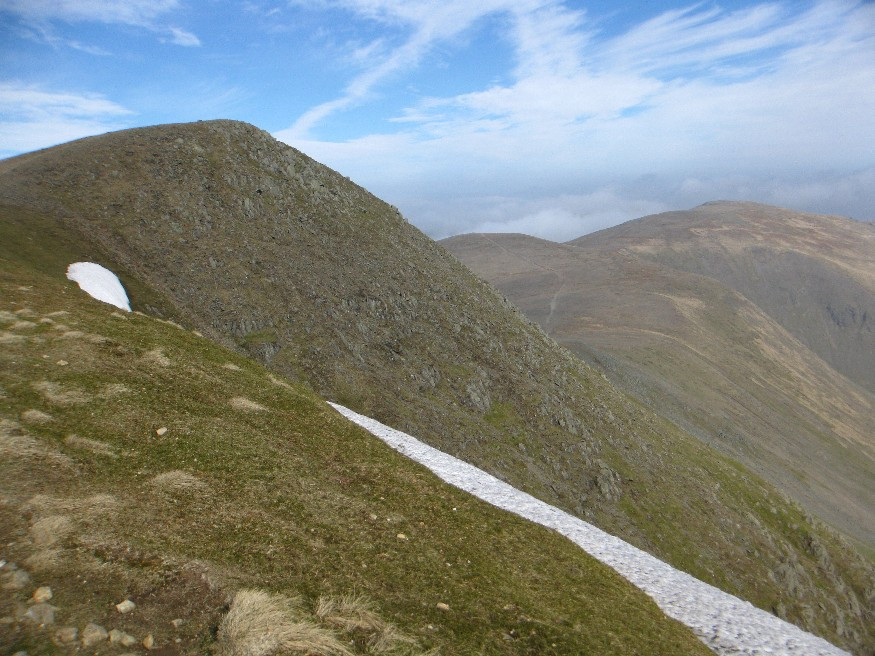 Helvellyn Lower man on the left with Whiteside and Raise beyond. 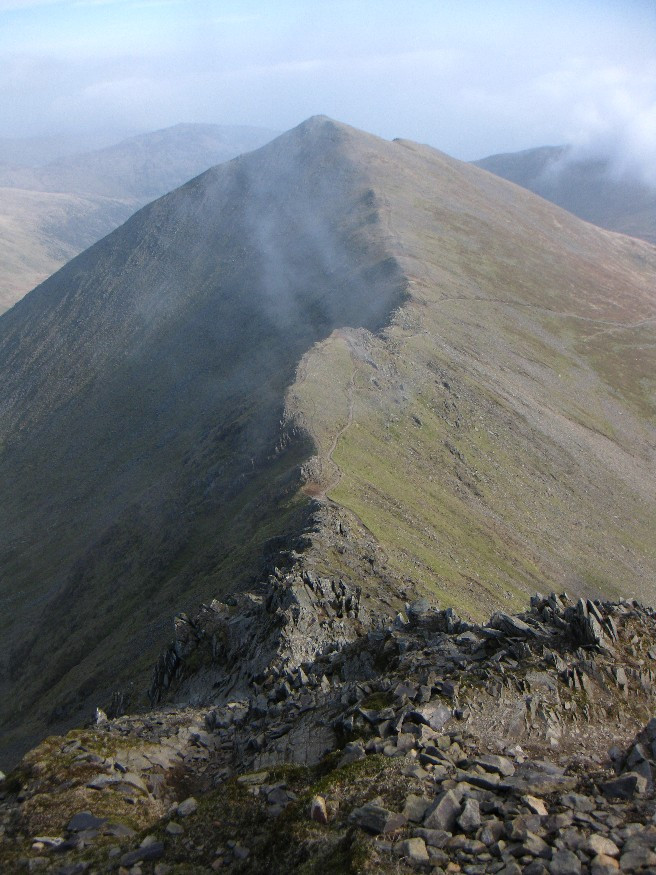 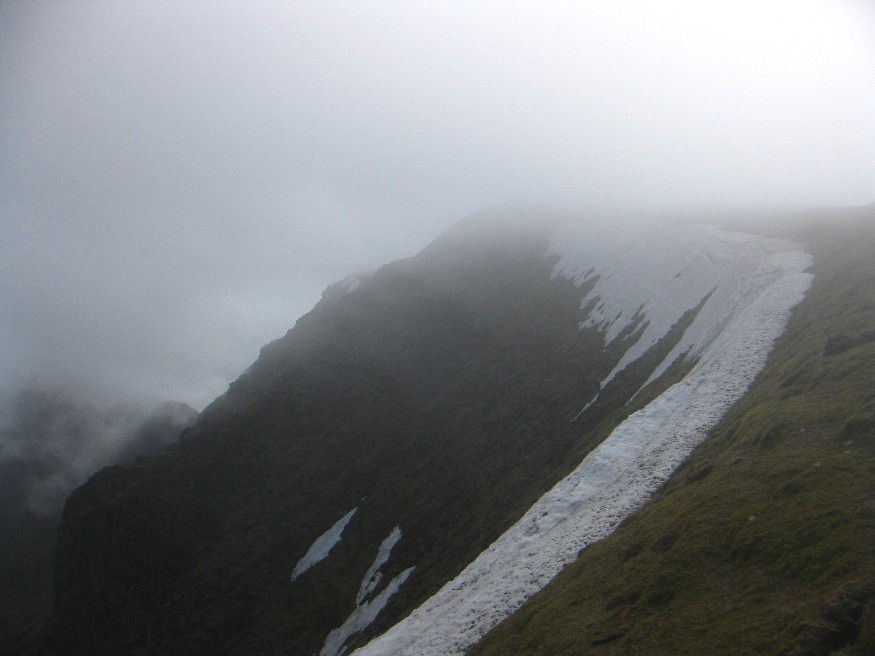 Fog on the summit plateau. 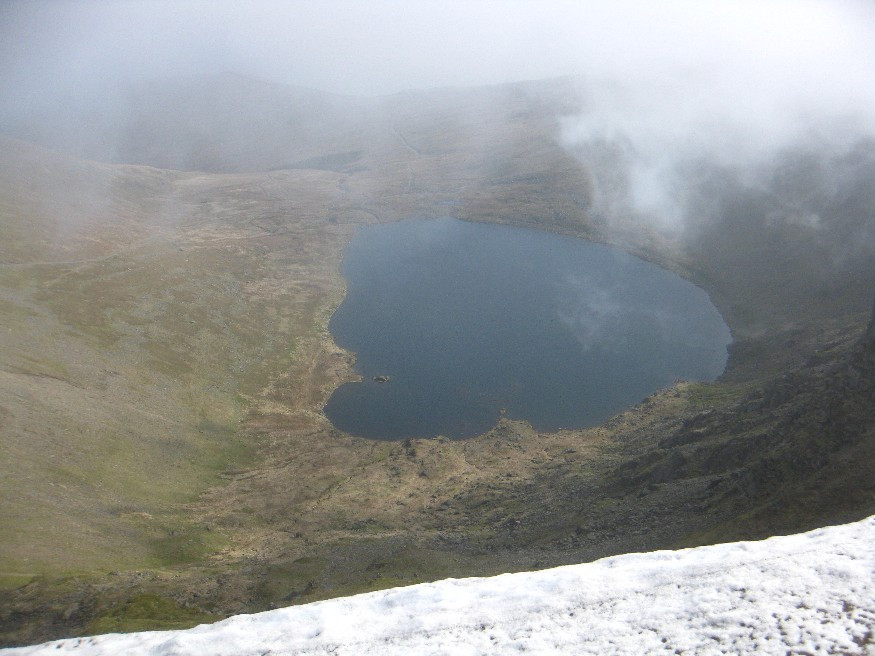 View down on Red Tarn. 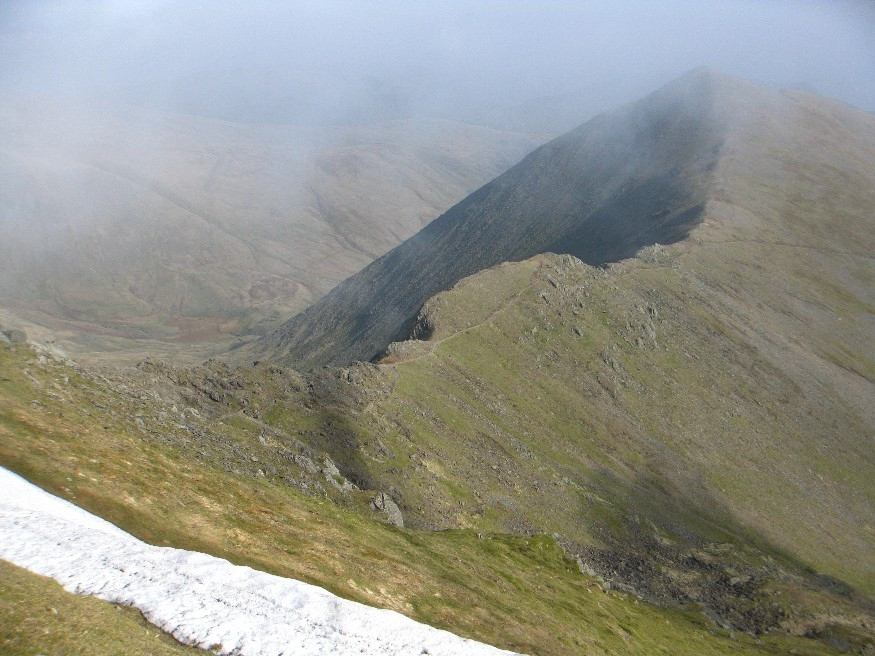 Swirral Edge again. Then cloud was everywhere and there was no view. 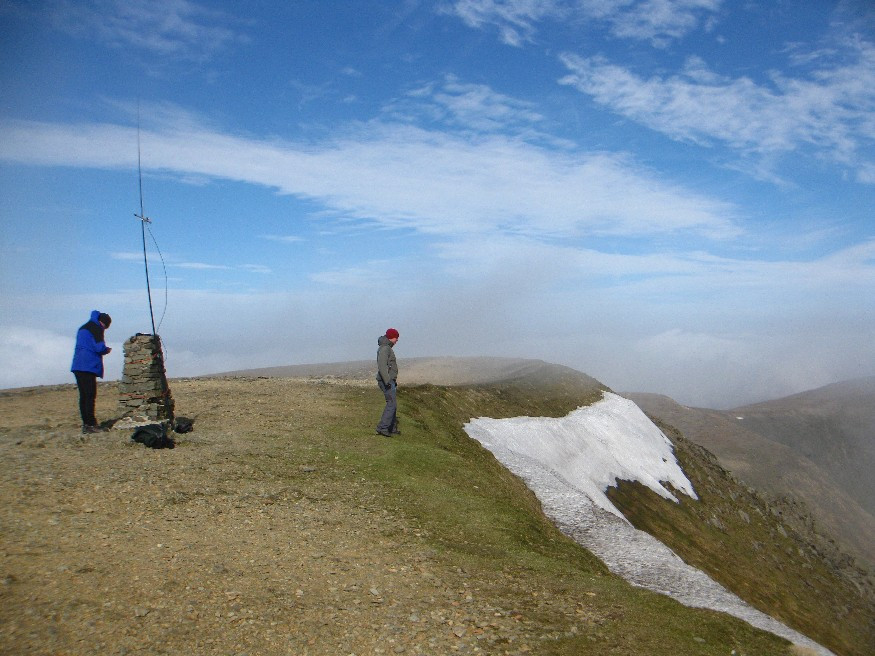 I chatted to these guys who had but a radio transmitter on the OS cairn. I never found out why as suddenly the fog cleared for a summit view and I went off to take some pix. 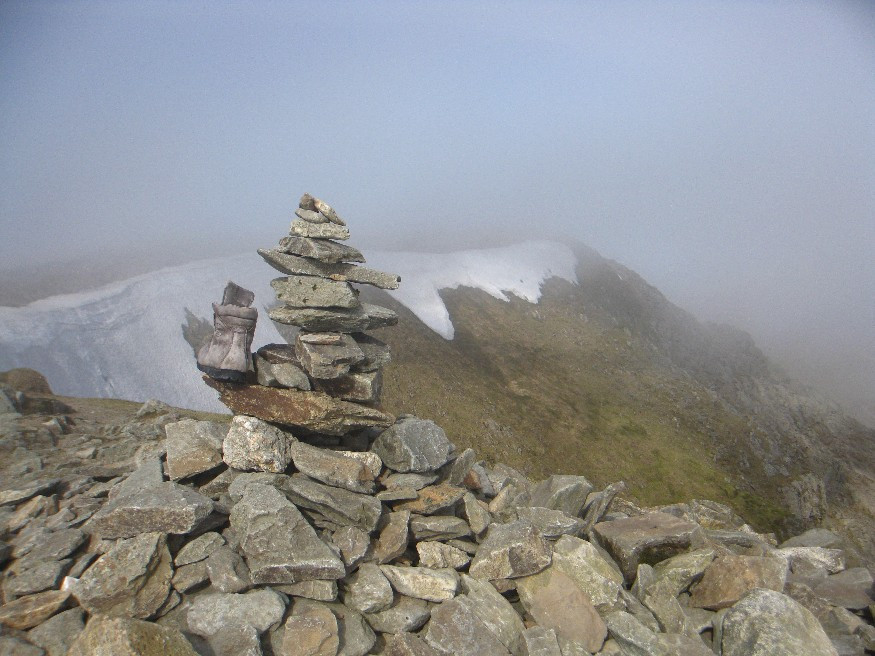 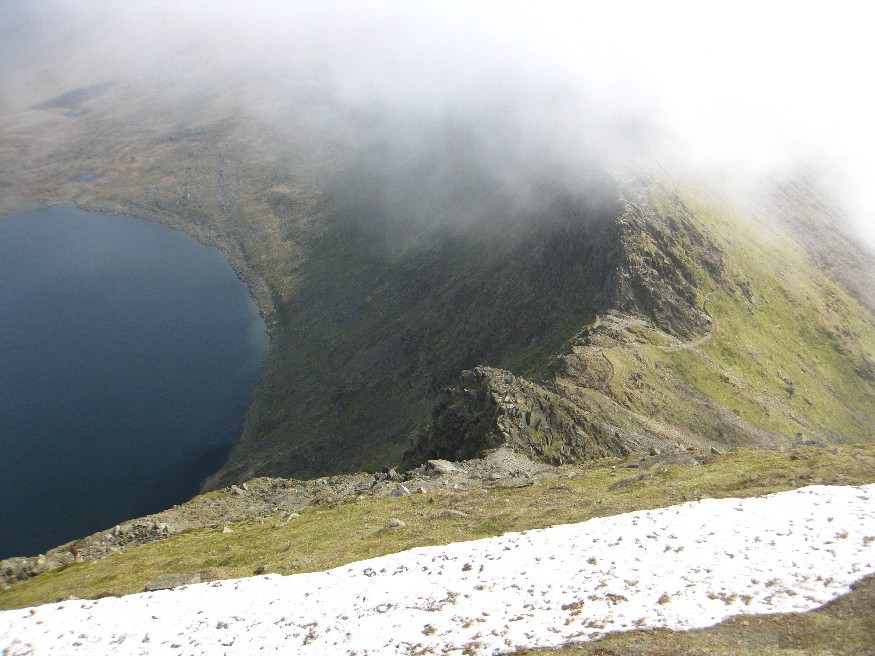 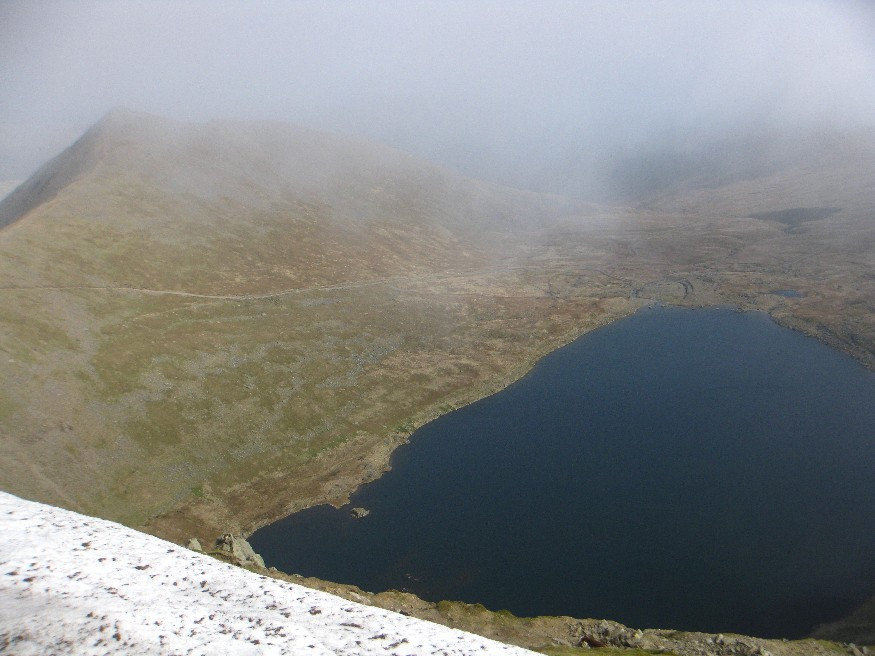 I went to see if I could get a view down Striding Edge, but the cloud had started to return. The three working guys and the dog were are just below me. 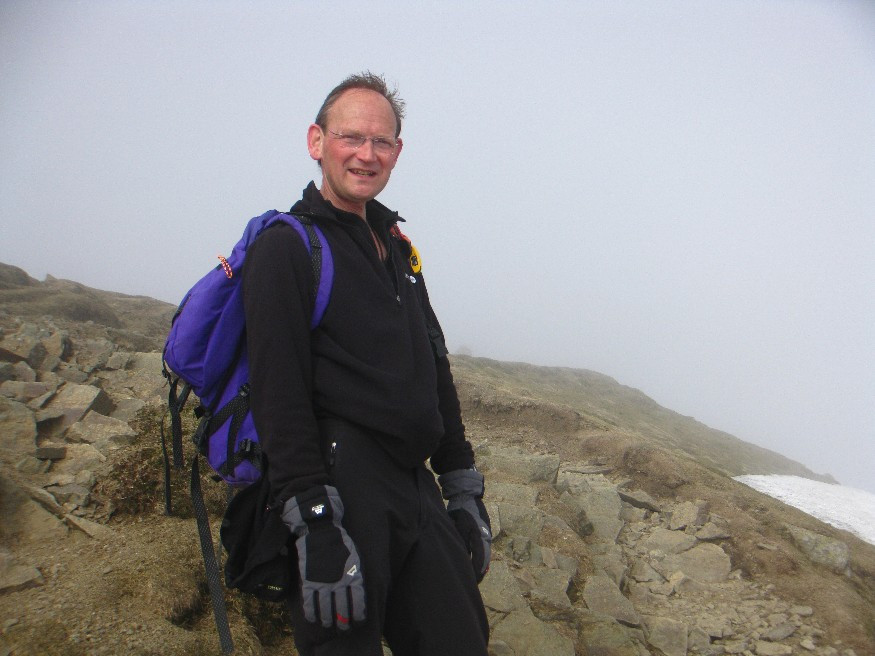 I chat to another gentleman that has just come up via Striding Edge. Turns out he is Jon Bennet, the Fell Assesor! He makes the journey up every day! He and his fellow Fell Assesor, Jason, do seven days on and seven days off. This week is Jon`s turn. He stays in Ambleside and varies his route up. He says the weather has been perfect today up until he was almost at the exit of Striding Edge. As you can see there is no view behind him now! He has had a good week on the summit seeing cloud inversions and Brocken Spectres. I let him know I`m a daily admirer of the website! There is only another two weeks until the end of the winter season and the forecast will revert back to being done by the met office. There has only been two days when he couldn`t make it to the summit this season and had to turn back. 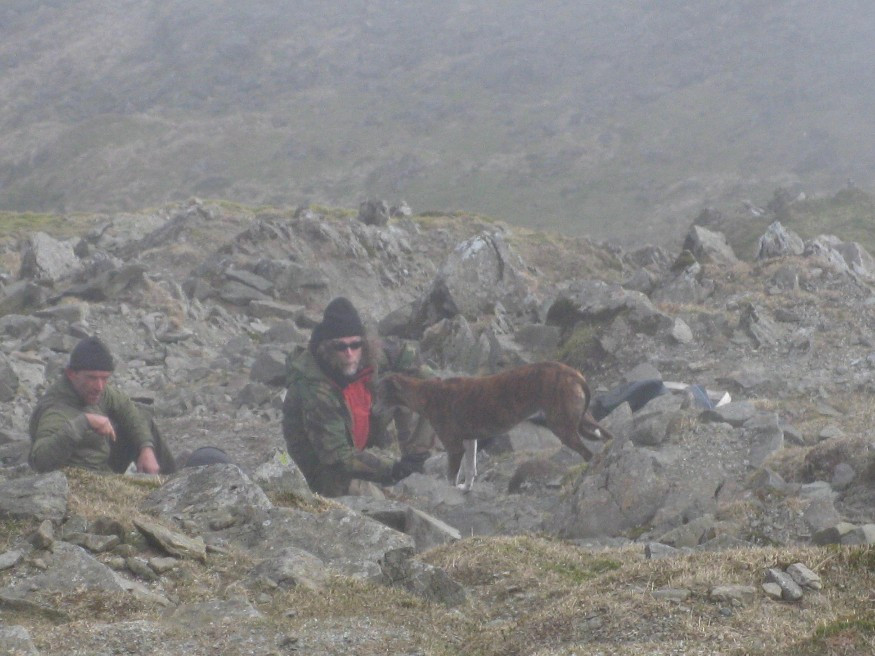 Jon goes off to do all his weather measurements on the summit I wait for a bit hoping the cloud will dissipate. Close up of two of the workers and the dog. 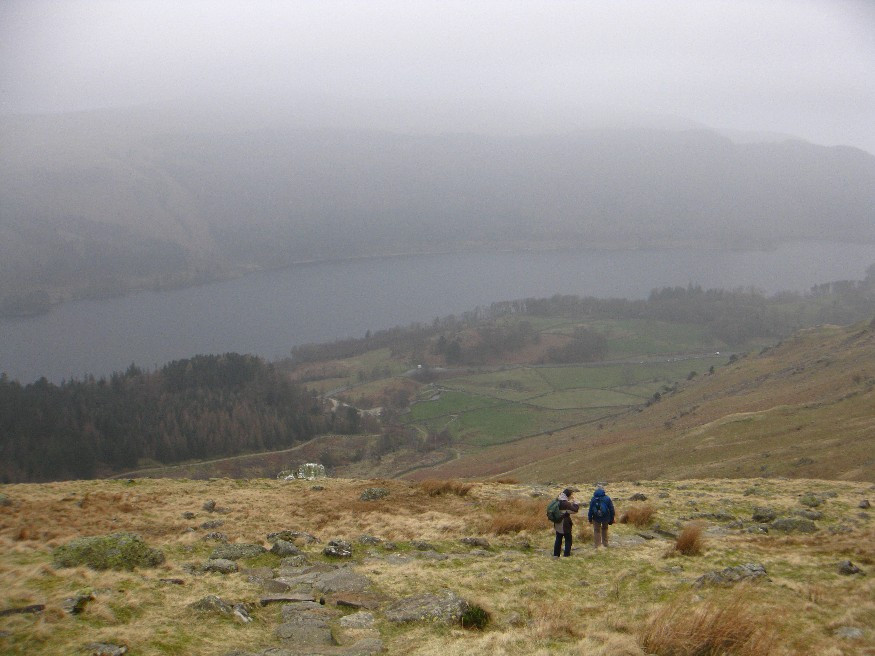 I walk back to the summit shelter and wait to see if the view will rematerialise. After half an hour I was joined by Hazel and Rosemarie who were on their first venture on Helvellyn. They had come up from Wythburn. We chatted for a bit while they had lunch. It was becoming rather cold just sitting. I had been on the summit for over an hour now. No change in the cloud cover. They quite fancied going down via Brown Cove Crags, but as there was now no visibility I showed them the way and we went down together. Then I gave them a lift back to Wythburn as Hazel was having some pain in her knee, and it is quite a long walk back to Wythburn along the new forest trail. I stop to take a photo. Hazel and Rosemarie heading down.

An easy walk there and back of just under 5 miles. I was back to my car by 1.30pm. After dropping them off I drove to Hayes to get some Thai Basil seeds and have a cup of coffee. I had to be back in Barrow for 4pm to pick Tom Up from Sixth Form College.
Still a good day even without the hoped for views!
Jo.