Andy's map of our walk route. It is under four miles and would take us three hours, but we dawdled!

'Donkey Rock’ or more correctly Eccle Riggs Bank Quarry exposes the underside of an ancient ocean floor sediment. The rocks in this quarry were laid down in an ocean when the Lake District area was 30 degrees south of the Equator some 425 million years ago.

Sue gives some sense of scale.

Next stop is Millom Rock Park. On the road to School Ellis from The Hill.

It is next to Ghyll Scaur Quarry.

There are lots of boards to describe what you are seeing and to give context.

Each rock is labelled either as Igneous, sedimentary or metamorphic and then individually named and its features described.

Jason is studying geology at A level, so it is perfect for him.

Views into the quarry.

Views to St. George Church in Millom where there is bell ringing later this afternoon.

To think we could have recreated that scene from 'Indiana Jones and the Temple of Doom'! Next time!

Haematite in the case.

We drive to Kirksanton and park on the grass behind the bus shelter. Just 25m south east is the path up to the Lacra Stone Circles.

We cross the railway line.

The view up Lacra Bank.

Andy looking out to sea.

Sue's photo of us crossing the wall stile.

Lots of sheep and lambs around, mostly heading off in the other direction as soon as they catch sight of us.

Sue tests out a sheep hole!

And even manages to get back through again!

The view back is lovely, but it was very windy.

We have a look at the old farm buildings of Lacra Farm.

It would have been a house with a superb view.

View down to the outer barrier at Haverigg and Hodbarrow.

We gain the highest point to look down on the stone circles.

Here's one! There's another a bit further on. They date from the Bronze Age. We can make out the jumbled remains of three (perhaps four or possibly five) stone circles, and a couple of stone rows. The whole area is a bit of a jumble of natural rocks and boulders, which makes things even more difficult to make out.

This may also be one of the stone circles.

View across to Barrow and the North End of Walney Island. I can see Jubilee Bridge and the steeple of St. James' Church.

Top left is where we were standing for the views, we head back to the farm and up in the direction of Blackcombe.

Looking down on the small village of Kirksanton.

A closer view. I can see the bus shelter and the cars.

Wonderful views out to sea.

Me, Andy and Jason well protected from the cold wind!

View out to the fells, including Harter Fell, left.

Po House. I've seen the sign for this every time I go up the coast! Now I've seen it!

Made from an old tyre.

The view back from the path alongside the wall. This path, I subsequently discovered, is not a public footpath, even though it appears to be a direct route to Hellpool, but private land. At the time we walked along it, it was being openly used by other walkers, plenty of cyclists and even groups of motorcyclists, hence our decision to use it. My advice would be to find an alternative route to Hellpool, and not trespass.

A bull, bullock, cows and a calf.

This lamb came running towards me.

Then decided I wasn't its mummy and ran off again!

View back from the bridge.

Looks very similar to an Oast House, just before the railway line.

The Giant's Grave Standing Stones. One of the stones is over 3m high.

We drive to the Beach Cafe in Haverigg.

'Escape to Light' a memorial sculpture for those lost in sea rescues, by Josefina de Vasconcellos. 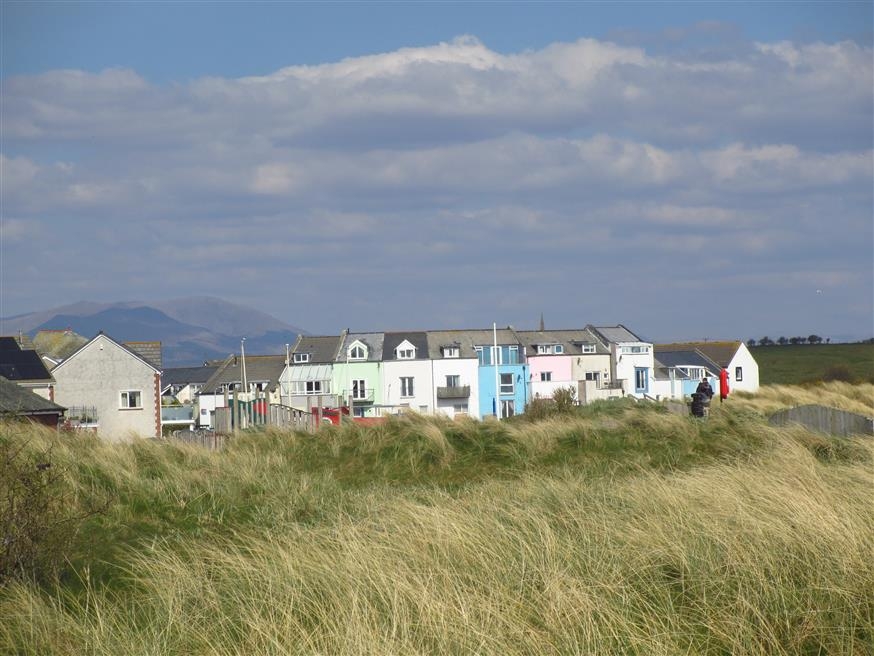 The view back along the beach.

An excellent day, just a pity it was so windy! Thanks to Sue for driving and letting me use a couple of her photos, and to Andy for organising the walk.