We decided to take a few days driving back to Dublin. One of our stops was Holy Island on Lough Derg. On a previous Ireland trip we had been to see Station Island on the other Lough Derg in Donegal, known as St. Patrick’s Purgatory. So we thought we’d better go see this one too. We drove to Mountshannon Marina and took Gerard Madden’s boat across to Holy Island (Inis Cealtra). Gerard is a local historian and author a several books on Holy Island, one of which I have. We ended up postponing the boat trip for an hour due to the inclement weather, but it meant we could get some lunch first. Gerard did not want us to get soaked on our journey over to the island, thankfully the rain held off. 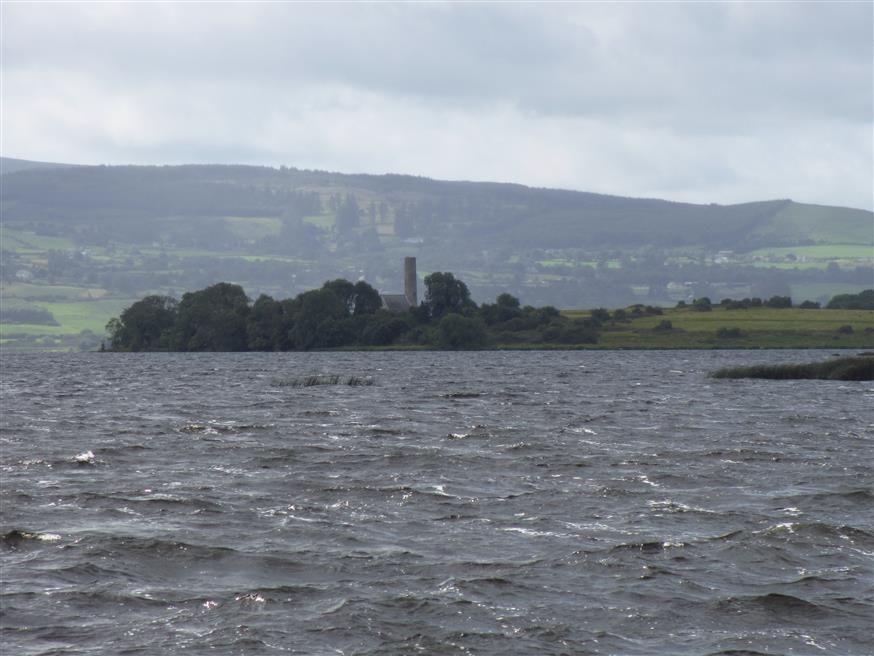 Close up view of the island from Mountshannon Marina. 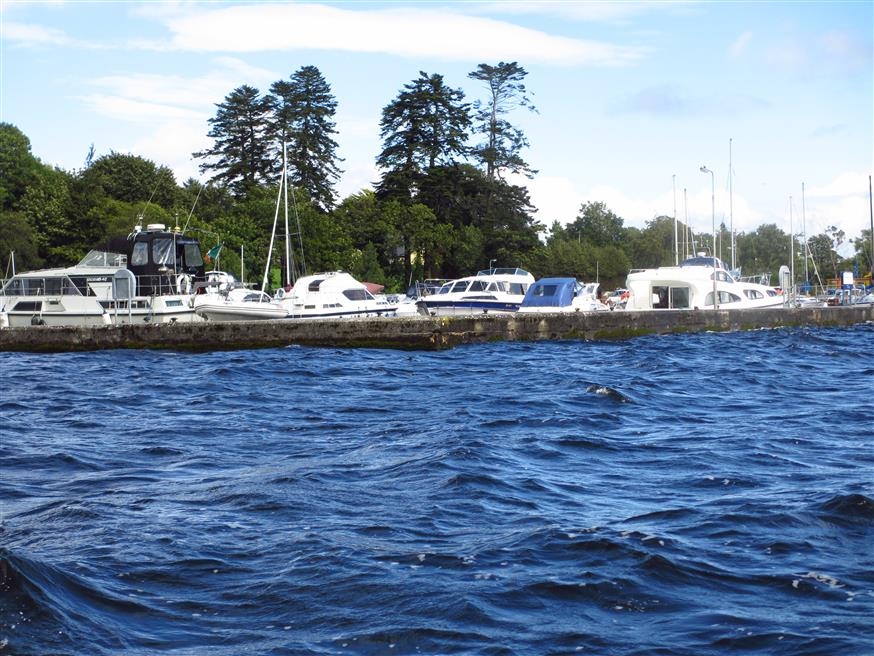 Heading away from the marina in Gerard's boat. 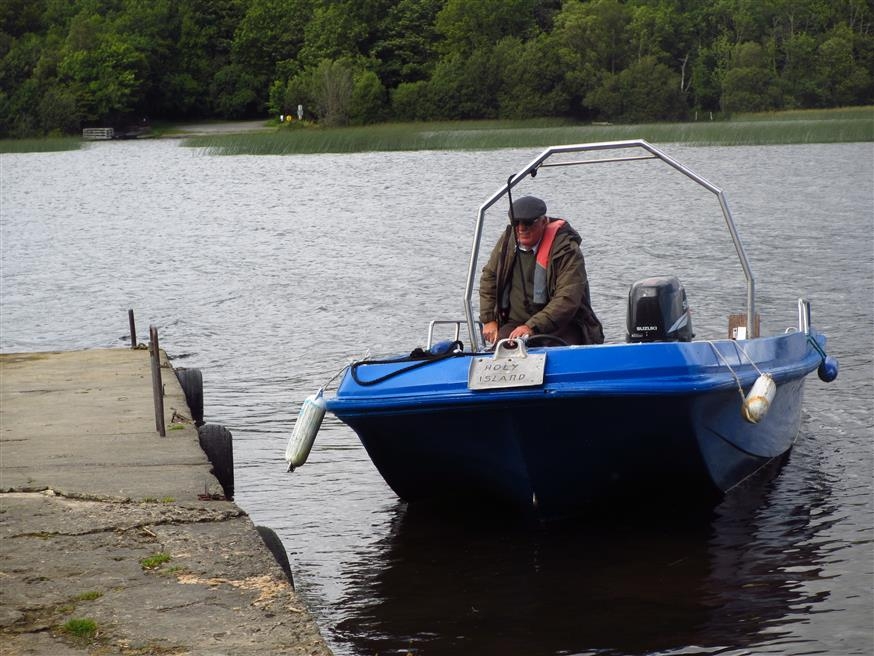 Gerard maroons us on the island with only his Guide Book for company. 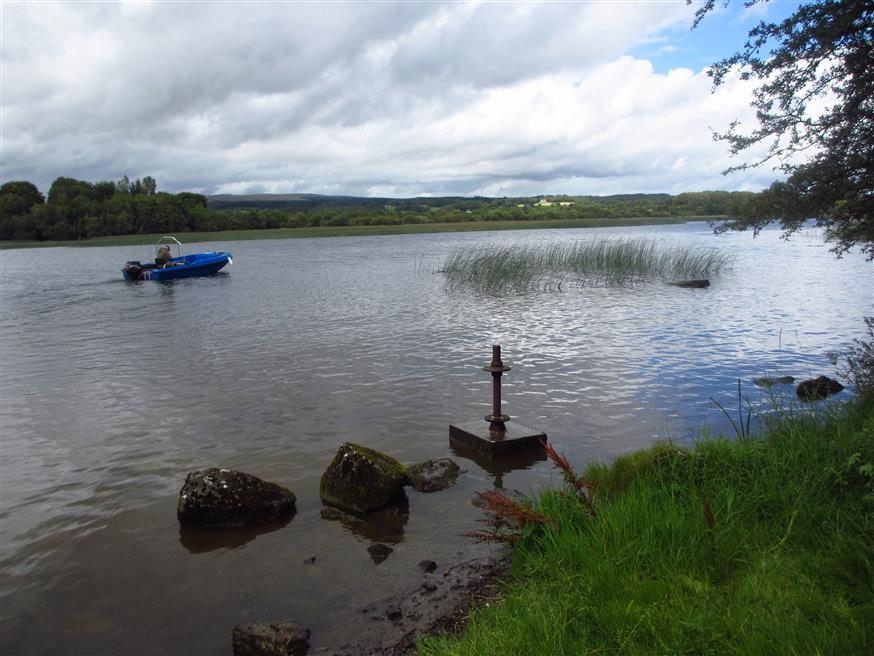 Off he goes. He will return at 3pm. 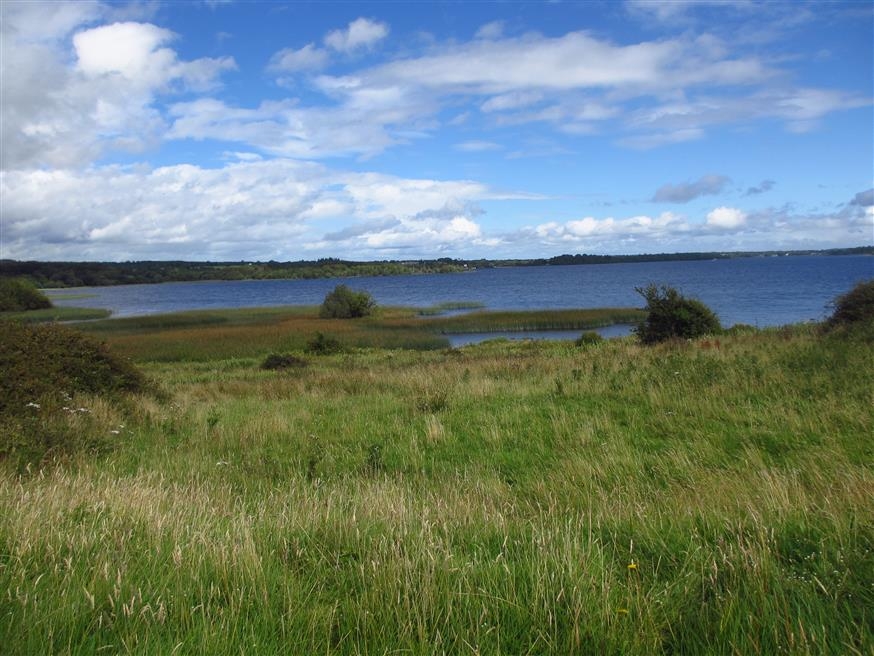 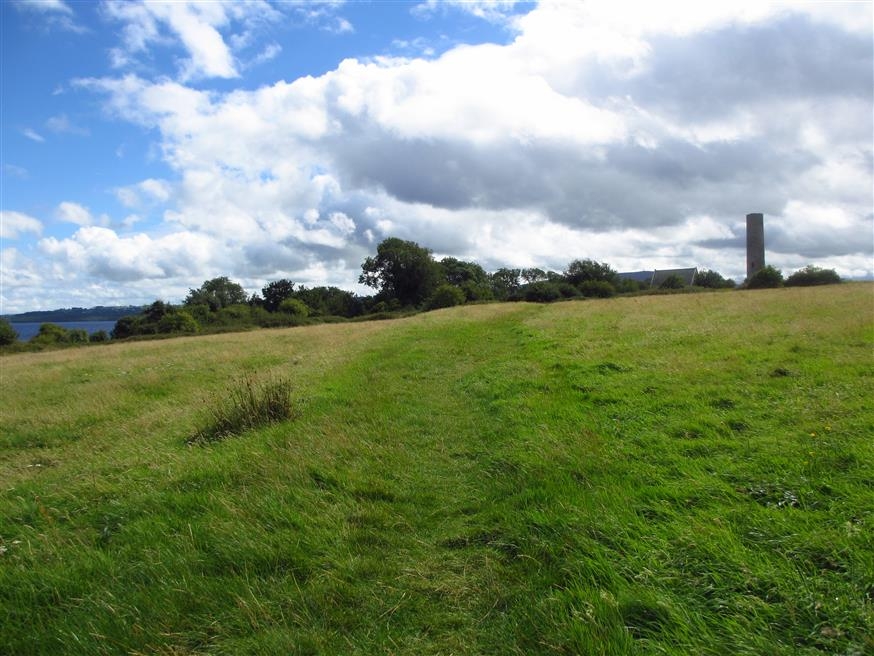 We follow a track called The Pilgrim's Road towards the five churches. Around 520, St. Colum founded a monastery on Inis Cealtra. The second monastery was founded by St. Caimin in the 7th century. 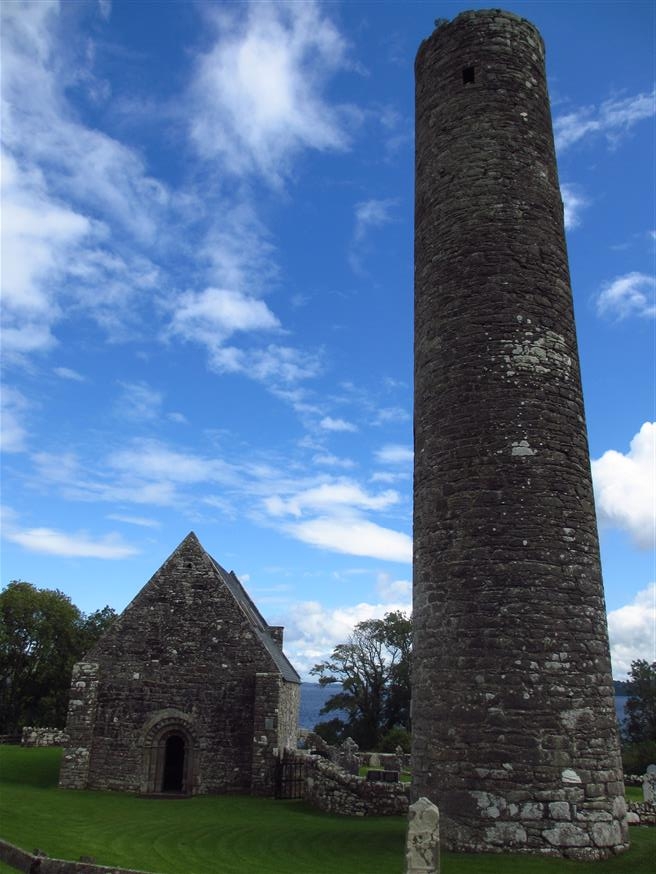 St. Caimin's Church and the Round Tower.

St. Caimin's Church may have been built by Brian Boru in 1000 AD, with additions in the 12th century. 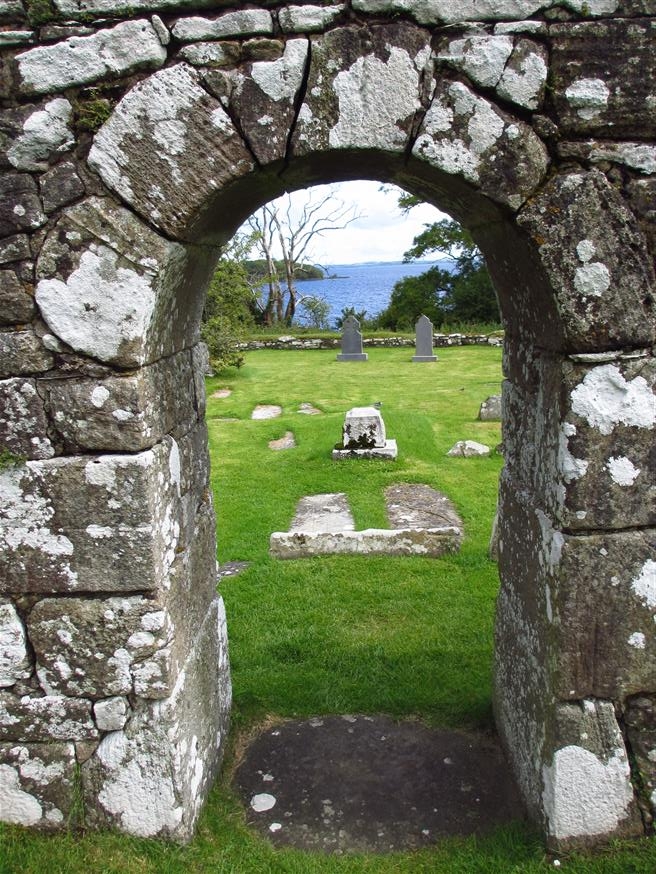 View to the grave yard. 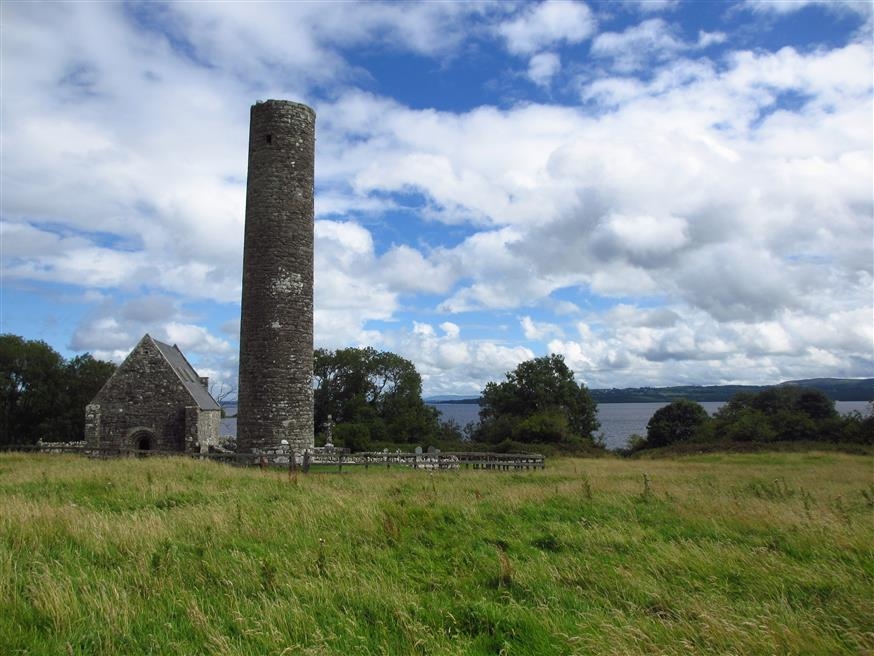 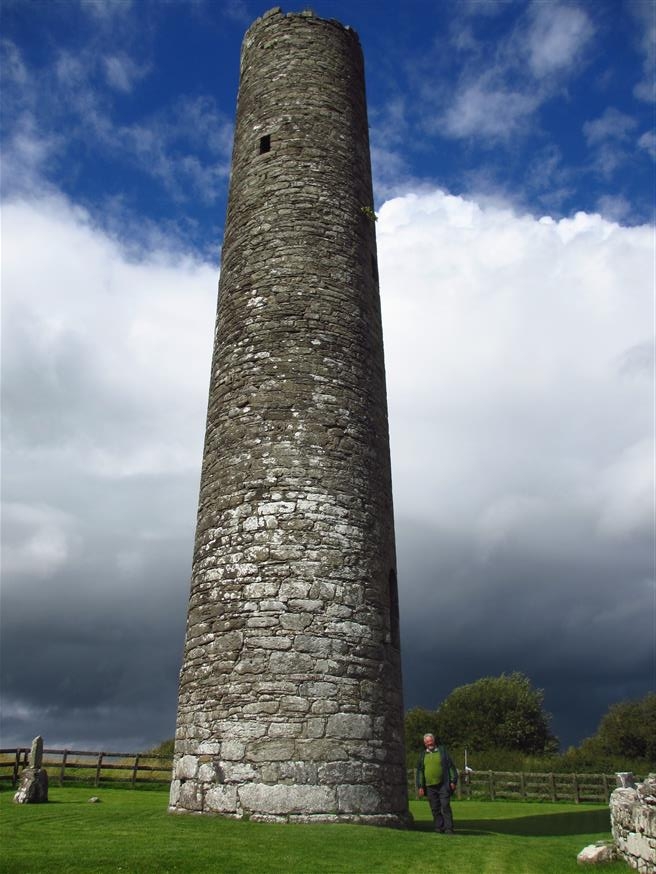 Brendan stands next to the Round Tower for scale. This was meant to be the monastery's bell tower, it is about 80ft high. I doubt they have a practice night! 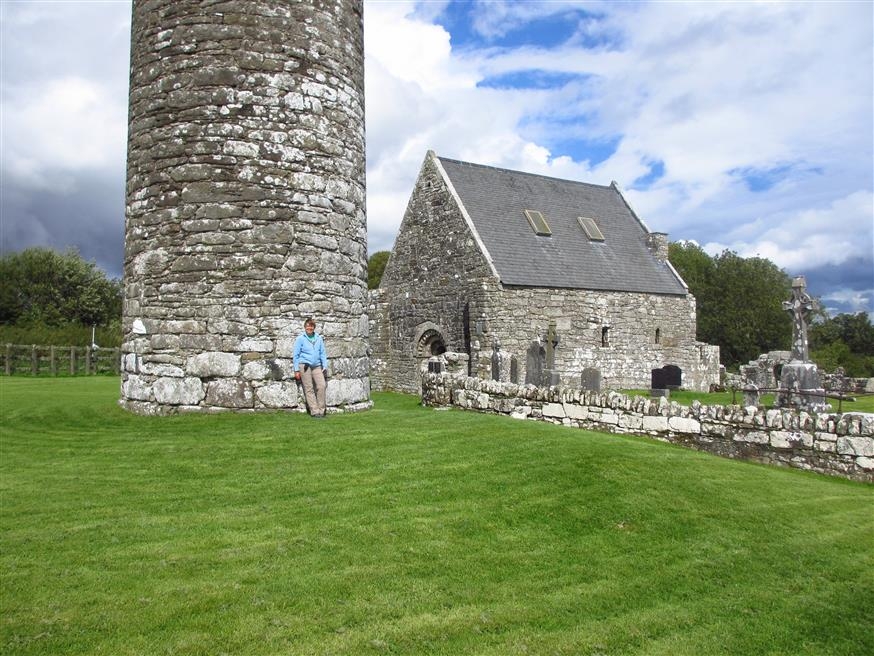 I pose for a photo. 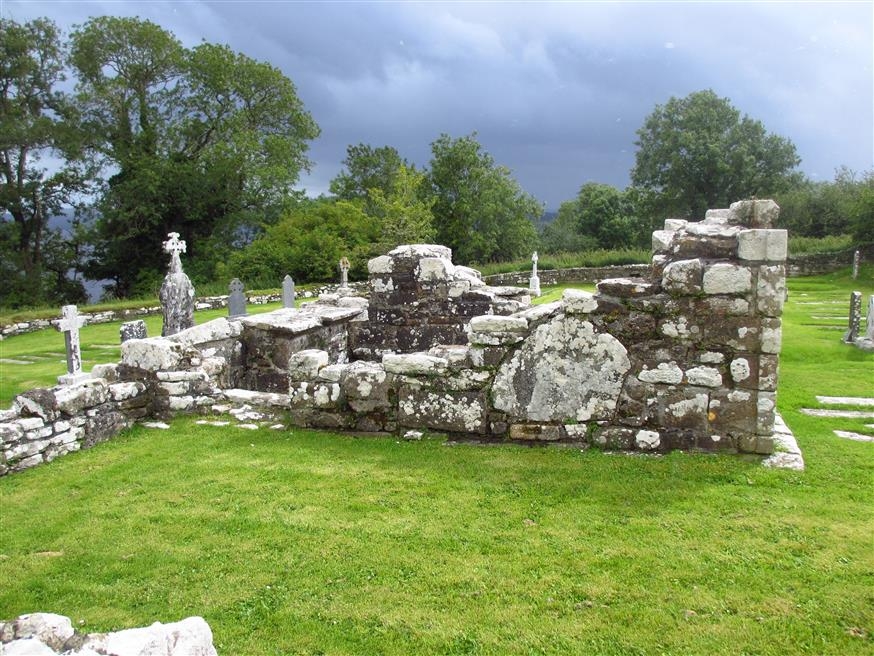 The Church of the Wounded Men was built in the 12th century. 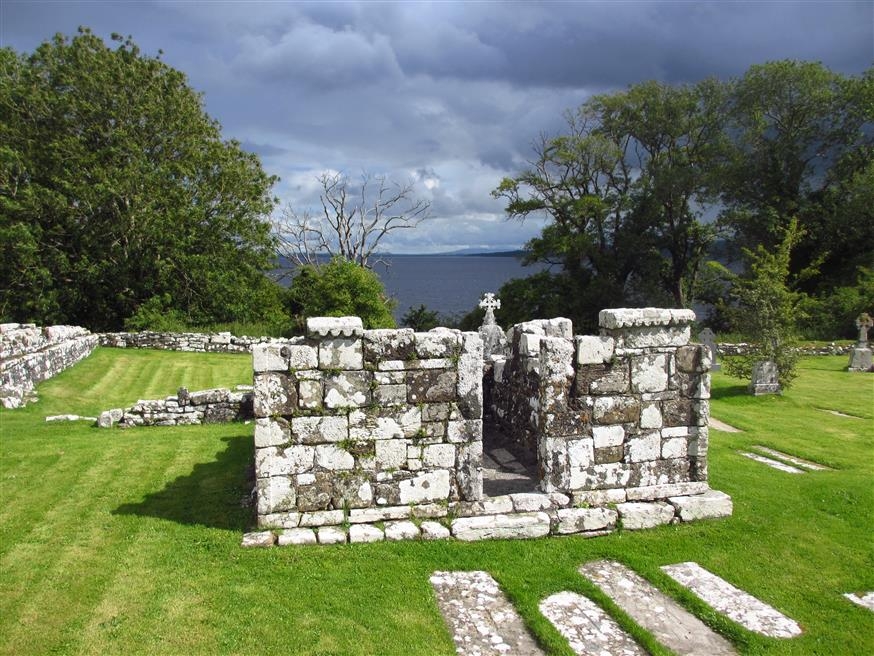 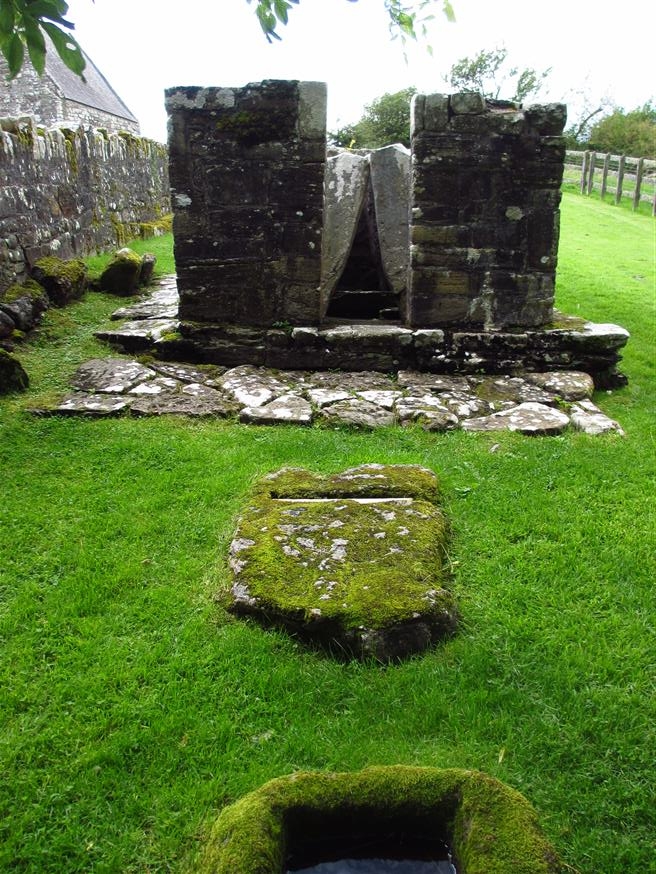 The Confessional. This building dates from the 1700's. It is one of the most curious ecclesiastical buildings in Ireland. It was probably a slab shrine which covered the tomb of a local saint. As such it would have been a focal point for pilgrims. The inclined stones allow access to a stone box structure, which would enable the devout to come into direct contact with sacred relics. 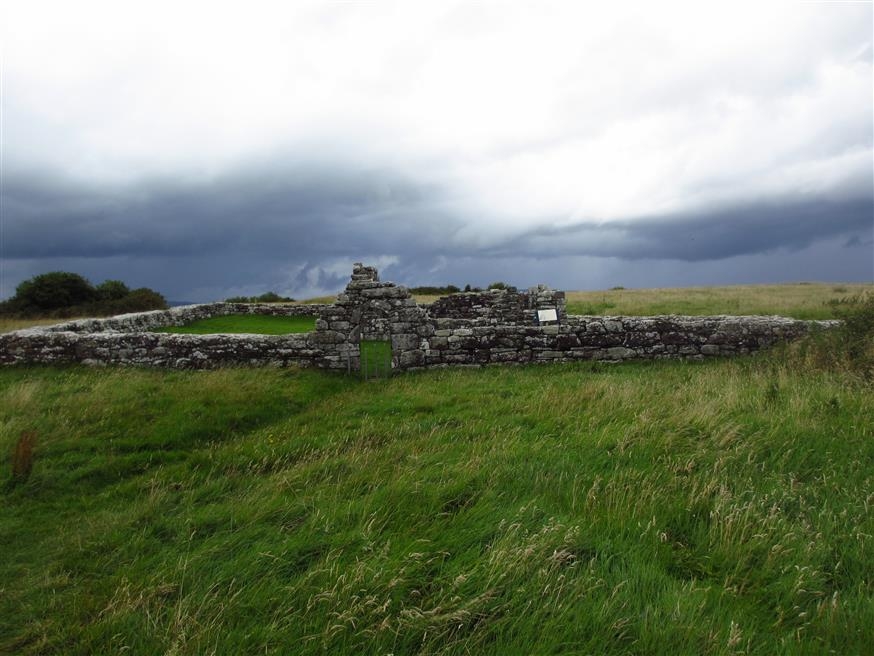 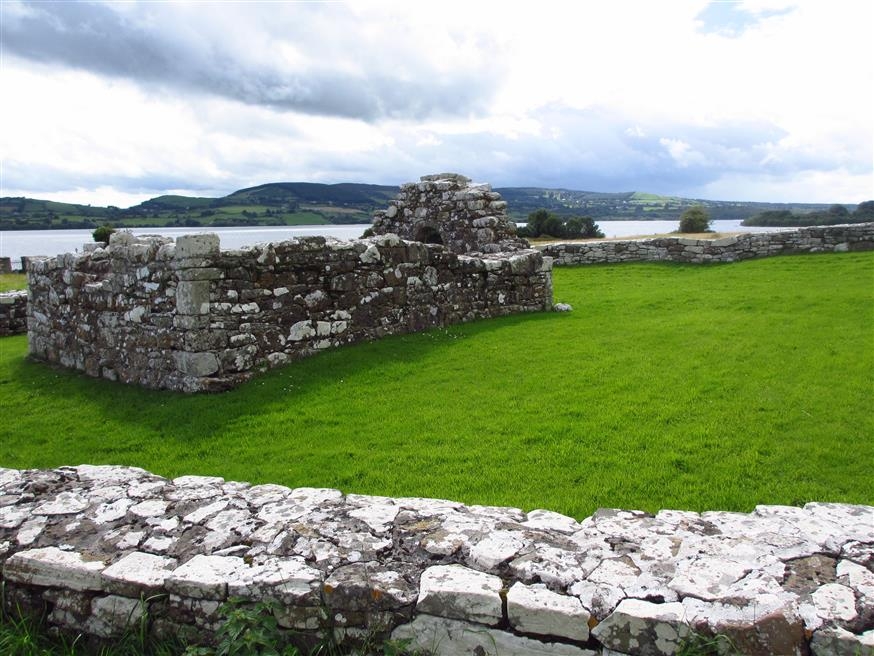 St. Brigid's is a small Romanesque church constructed in the early 13th century. 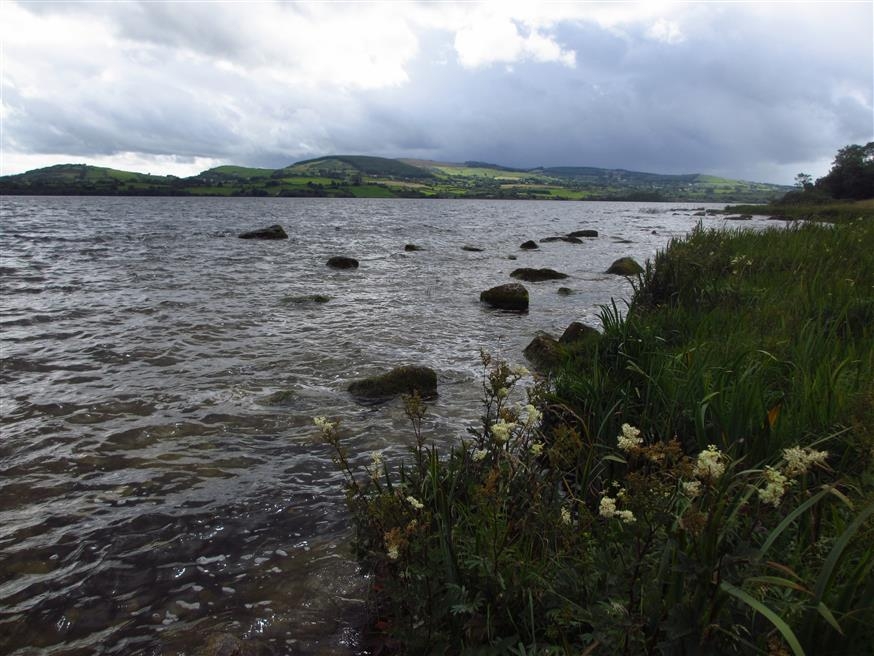 View out from the opposite side of the island. 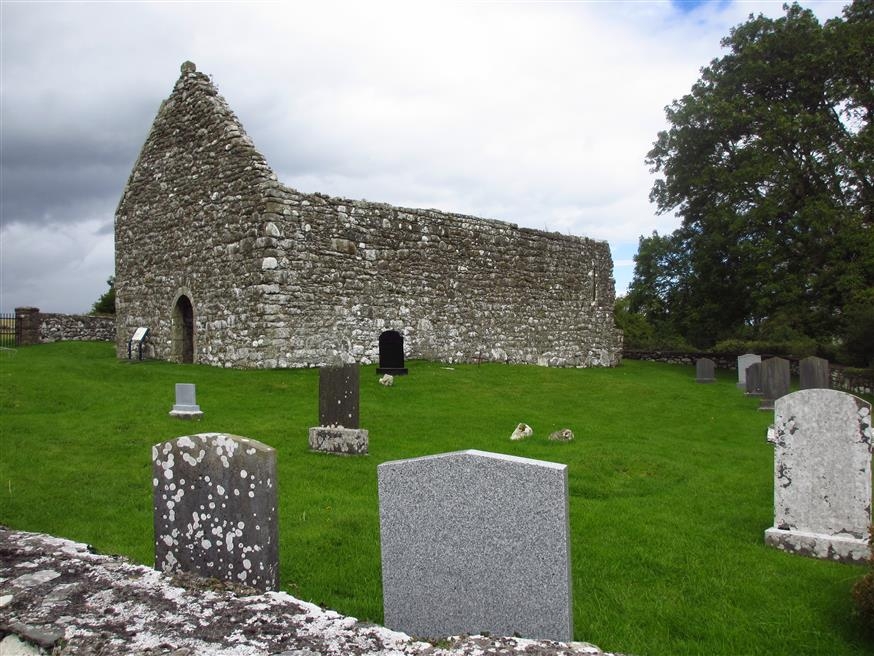 St. Mary's Church was built in the early 13th century. The cemetery on this island is still in use, coffins and mourners being transported the short distance from County Clare in small boats. 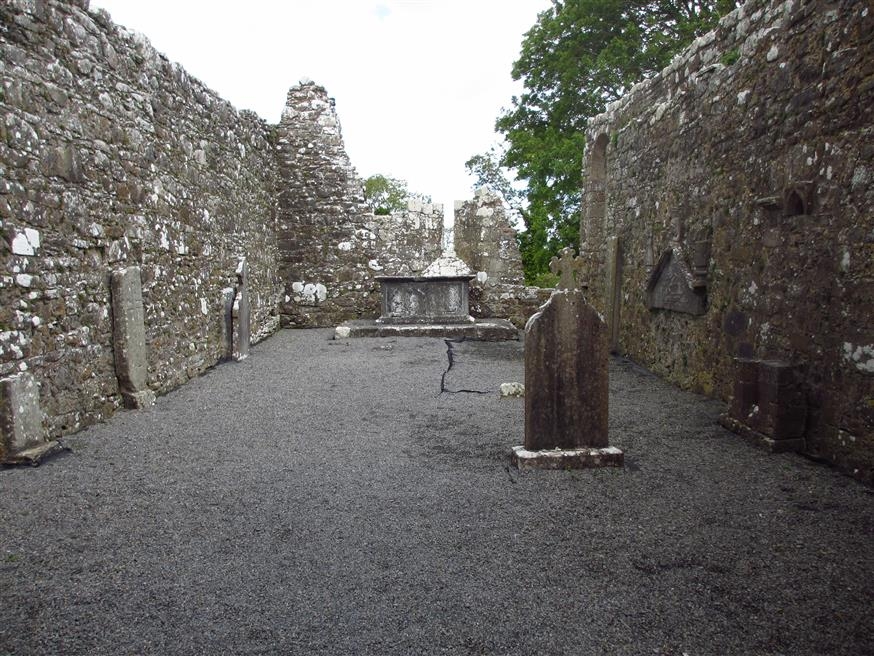 This curious channel built into the wall has not been explained. It has been described as a 'leper's squint', a 'musket loop', and a sacrarium. The third is thought to be the most likely. (For disposal of water and particles from the consecrated Eucharist) 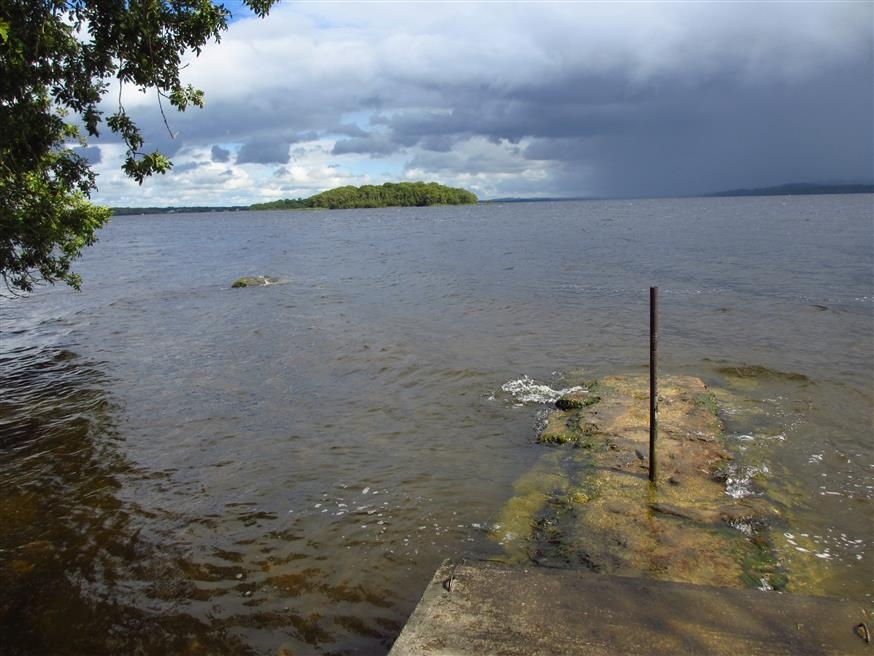 The second of the island's two jettys. 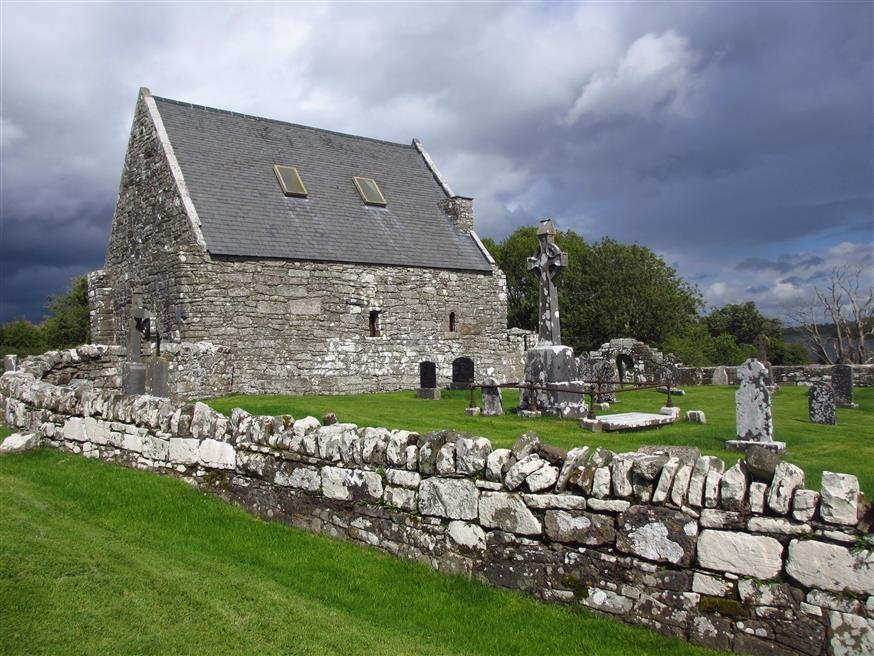 We head back over towards the other jetty for our boat ride back. 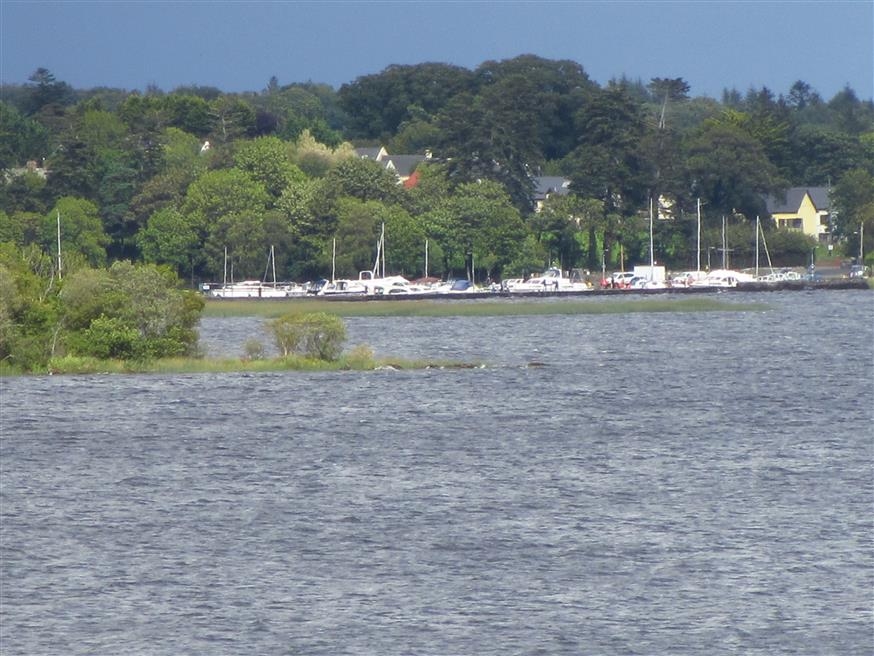 Close up view back to Mountshannon. 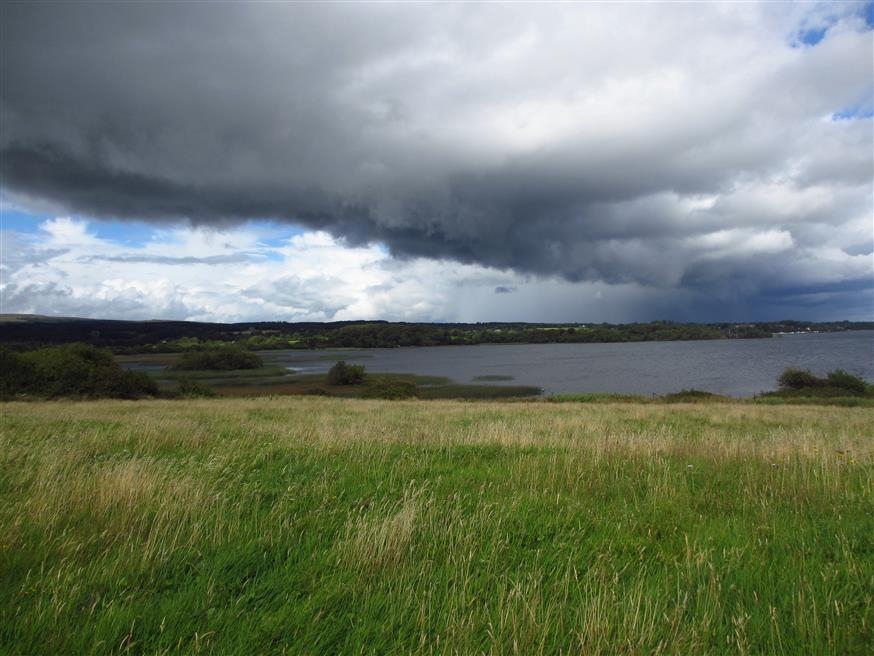 We have been rather lucky with the weather, it never rained. 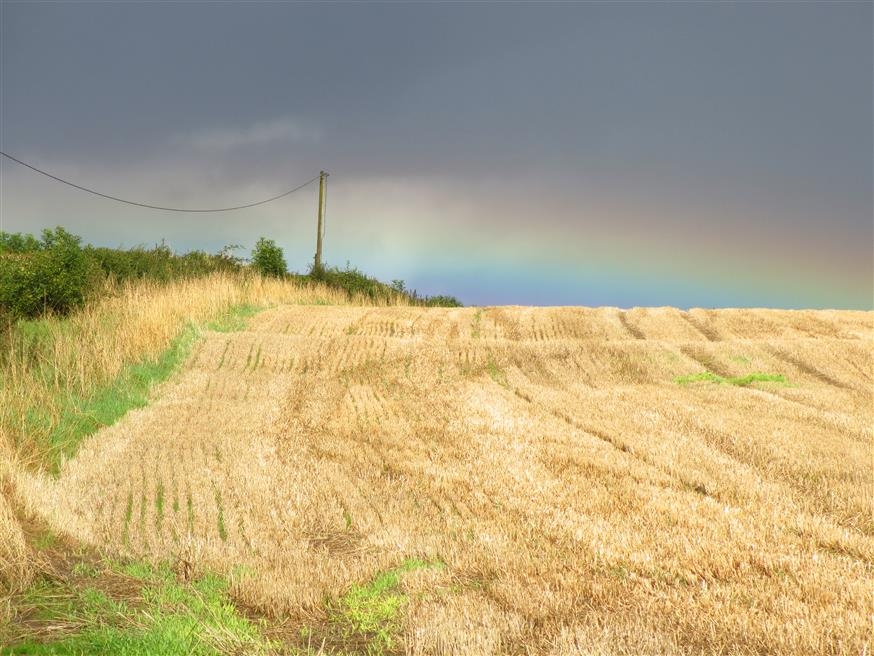 It poured down on our drive to Clonmacnoise, leaving a rainbow. 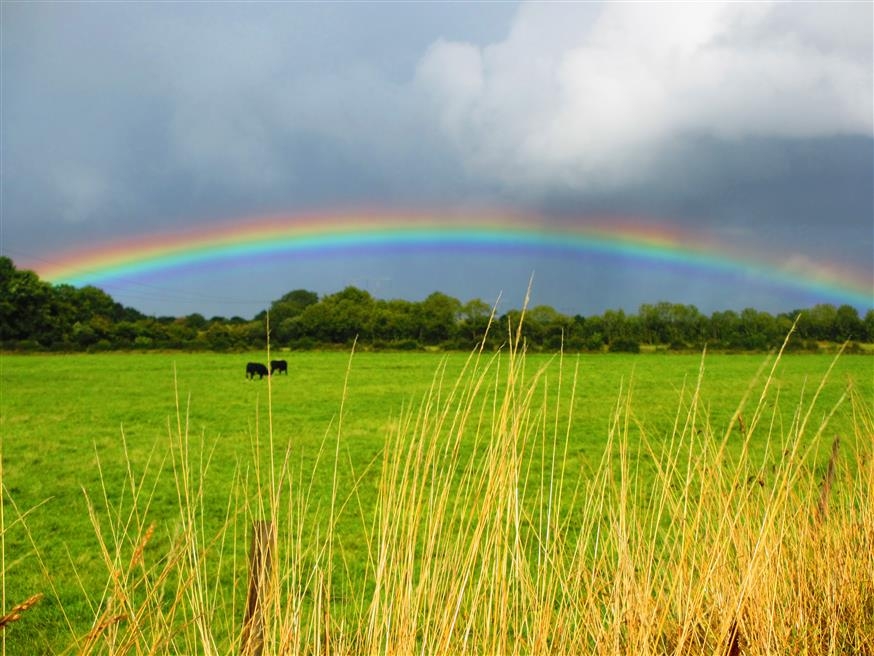 We had a most enjoyable time roaming around the island. There are boards to tell you what you are looking at. The boat trip was 12 Euros each, well worth it. Off to Clonmacnoise next, another monastery!